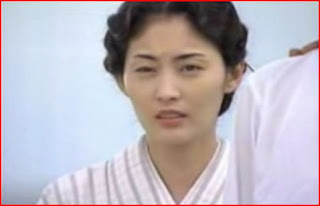 In the fall of 2003 Japanese TV Asahi released a made for tv movie about one of the greatest (yet overlooked) royal romances of World War II. The mini-series was Ruten no Ohi - Saigo no Kotei and featured actress Takako Tokiwa in the starring role as Princess Hiro Saga, the Japanese wife of Prince Aisin-Gioro Pujie, brother of the last Emperor of China who was then reigning as Emperor of Manchukuo. A moving film that manages to avoid the most extreme politics it is a true story that no fiction writer could top and Takako Tokiwa plays the part to perfection. Lady Hiro Saga was a young woman pushed into an arranged marriage to strengthen Manchu-Japanese ties and yet she comes to have a deep and abiding love for her husband. The two weather fiercer storms than most couples could imagine and the film gives a sympathetic portrayal of the royal pair throughout the tempestuous years in Manchukuo, Pujie's arrest and their heart-breaking years apart ending with their happy reunion in old age. It is worth pointing out in light of Tokiwa's wonderful performance that she actually went to school with Hiro Saga's grandson. If you like true stories of royal drama that pull at the heart strings this is one to check out. For a short overview see the clip here accompanied by a beautiful song by Huang Yida called "The Last Princess". See a royal match that truly stood the test of time.

Posted by MadMonarchist at 1:20 AM