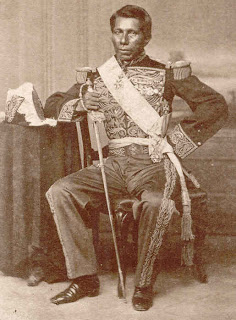 Of all the top generals of the second Mexican Empire none were probably so universally praised and respected as Tomas Mejia. Much is unknown about his origins, he may have been from the state of Guanajuato and the year of his birth has been listed variously between 1812 and 1815. He was full-blood Indian and an extremely devout Catholic who fought for the pro-Church party in the "Reform War". He first held aloof during the French invasion, praying for the Holy Virgin to give him direction. When he met Emperor Maximilian he found in him a man worthy of his support and loyalty; a selfless leader who could have been the political salvation of his country. Once he made his choice the Emperor had no more upright, talented or steadfastly loyal defender than General Mejia.

Some were shocked at Maximilian giving such high rank to an Indian but the Emperor's faith in Mejia was not misplaced and even his enemies had to admit that Mejia was an honest, upright and always humane and gallant officer. He was placed in command of the northern forces of the Mexican Empire and drove the Juaristas out of San Luis Potosi and continued north to the Texas border where he occupied the city of Matamoros. With wars raging on both sides of the Rio Grande it was a difficult position for General Mejia but he was more than up to the challenge. When the Juaristas launched a major attack on the city Mejia successfully fought them off, at one point even leading a cavalry charge in a counter-attack himself when the republicans briefly broke through his lines. Following the disastrous defeat of General Olvera at the battle of Santa Gertrudis Mejia was forced to abandon Matamoros but the republican general Escobedo allowed him to retreat unmolested because Mejia had once spared his own life.

General Mejia joined Emperor Maximilian at his heroic last stand at the siege of Queretaro and again led a desperate charge with his cavalry when republican troops entered the city even though he was extremely ill. Following the capture of Queretaro Mejia was subject to a show trial with the other imperial leaders. By that time his devoted wife had arrived to plea for his life and when sentance was about to be passed an observant and sympathetic Maximilian carried the hysterical woman out of the courtroom to spare her the ugly scene. Mejia was a devoted family man, husband and father and his wife was beside herself at the thought of losing him. When Mejia, along with Maximilian and General Miramon was being moved to the place of execution his wife was almost killed when she clung to the wheels of the wagon they were being carried in weeping uncontrolably.

Wearing a dark suite and carrying a crucifix General Mejia met his death with the same stoic Indian courage he had displayed throughout his life. As the republican firing squad aimed their rifles and fired the deadly volley General Mejia shouted his last words, "Long live the Emperor!"
Posted by MadMonarchist at 1:03 AM