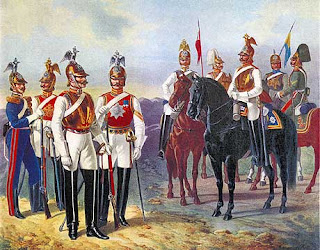 The Russian Imperial Guard was founded to replace the Streltsy which was considered too politically unreliable by Czar Peter the Great. He started with 50 close friends he had known since his youth and followed closely the example of the Prussians and so the Russian force was often known as the Leib Guard and all members had the title of "Life Guard" attached to their ranks. Throughout the life of the Russian Empire the Leib Guard distinguished itself in many battles in many wars across Europe alongside their first duty of protecting the life of the Czar of all the Russias.

Early on the Leib Guard was known more for parade ground precision and as a way to prepare Russian nobles for military command in combat units. They remained behind, for example, drilling in the squares of St Petersburg while other Russians units fought in the Seven Years War. Aristocrats traditionally predominated in the Leib Guard although it was open to all levels of society. Czar Paul enforced stricter guidelines on the Guard and his son, Czar Alexander, took them into the field as a front-line unit. During the Napoleonic Wars they really gained their reputation as an elite fighting force in the Imperial Russian Army. They performed heroically, for example, at the epic battle of Borodino. After the battle of Austerlitz, though it was a defeat, no one would ever again think of the Leib Guard as parade ground troops.

Every regiment of the Leib Guard had a Romanov as honorary colonel-in-chief and was a common sight on battlefields throughout Europe with the Russian military. The end of the Guard came in World War I in which, as happened in virtually every other army involved, this elite corps of troops was decimated in massive frontal attacks against storms of German and Austrian machine gun fire. In 1905 it was troops of the Leib Guard who fired what many consider the first shots of the Russian Revolution when they killed 96 out of a crowd of 80,000 protestors at the Winter Palace. The disaster that was the Russian Revolution hit hard in 1917 and, unfortunately, the Leib Guard was not immune. The Pavlovsky Regiment mutinied and had a shoot out with Russian police forces and thereafter one guard regiment after another mutinied as well to join the forces of the horrific revolution. The Palace Grenadiers of the Moscow Regiment were the last to remain loyal to the Czar and when Nicholas II ordered them to leave the Winter Palace so as not to make it a potential battleground the unit simply dissolved on its own and not long thereafter Czar Nicholas II abdicated and the ancient, proud Russian Empire came to an end.
Posted by MadMonarchist at 12:08 AM