The Shameful Ways of Republicanism 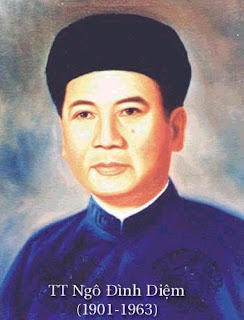 It was on this day in 1963 that Ngo Dinh Diem, first President of the Republic of Vietnam, and his brother Ngo Dinh Nhu, leader of the Can Lao party (personalist) were assassinated during a coup under the overall leadership of General Duong Van Minh. Monarchists might have a hard time feeling any sympathy at all for Diem and Nhu, who were themselves brought to “power” by a totally rigged and orchestrated referendum against the former Emperor Bao Dai (then Chief of State) in 1955. However, this was a tragic event for the Vietnamese First Family certainly (the only members to survive were those who happened to be out of the country) but it was also a pivotal moment for the widening north-south, communist-non communist war and the involvement of the United States. President John F. Kennedy signed off on the coup though he stressed that he had no idea that this would involve an assassination (rather naïve of him if true) and many have pointed to this passive U.S. support (the official American position was that they would not oppose a coup when advised of it ahead of time) was possibly the greatest foreign policy blunder of the United States in the twentieth century.

President Diem certainly had his enemies who opposed him for a variety of reasons. Some of it was religious. Diem was Catholic in a predominately Buddhist country, seen as “too Catholic” to many, intolerant of other religions and somewhat puritanical due to his policies to encourage public morality (closing down brothels and opium dens, outlawing divorce, abortion, contraception and so on). Many American political elites had come to oppose him because he failed to live up to the liberal image they had portrayed him as early on. When U.S. agents (particularly CIA Colonel Edward Lansdale) helped him attain the presidency Diem was portrayed in the American media as the champion of democracy, the “Winston Churchill of southeast Asia” and so on. Once in power, however, they bristled at his ceremonious style, autocratic tendencies and complained that he was behaving more like a monarch than a president. He was also not being compliant with American views on how the war against the Viet Cong insurgency should be ways. Complaints began to circulate in Washington that the ‘puppet’ wanted to ‘pull his own strings’.

Of course, if anyone at the time had actually gone to the effort to make themselves familiar with recent Vietnamese history, the background of Diem and the prevailing political culture, none of this would have come as such a surprise. Ngo Dinh Diem had been a mandarin, a leading member of the Catholic faction in the Forbidden City and the political pupil of the most prominent Catholic royalist Nguyen Huu Bai. His background was monarchist and nationalist and his family had served at court for a very long time only first leaving when the French removed Emperor Thanh Thai from the throne in 1907. Diem himself was very opposed to French rule and though called to high office again when Emperor Bao Dai took up his duties he soon resigned when the French would not allow the young Emperor and his young, reform-minded mandarins to have much actual control over anything. It is not surprising that when he worked with U.S. support to depose the former monarch in 1955 (who was not in Vietnam and had been residing in France for some time previously) that many viewed it as a change in dynasty rather than a genuine exercise in democracy.

However, in spite of all opposition (which Diem always dealt with by confrontation rather than negotiation) and in spite of what most today believe, he was on the whole succeeding. His forces were prevailing even without direct American military intervention; something Diem opposed. The U.S. was very helpful to him certainly, and he recognized this, but he also believed that the U.S. had no real understanding of the situation in Vietnam and did not seem very interested in learning. He was glad to have American support but wanted to keep the U.S. at arm’s length and certainly did not want them taking overall control of the war effort which would have been contrary to both his political ambition and his nationalist background. The U.S. government, at that point, lost patience with him quickly. The American media only ever talked to opponents of the regime and painted a very bleak picture of South Vietnam which put increased pressure on President Kennedy and the Democrats in Congress. When news broadcasts portrayed the situation in Vietnam as going rapidly downhill under Diem, after Kennedy and Johnson had so championed him, the Democrats demanded that Diem be brought to heel. When he refused to be subdued the ambitious generals in the ARVN decided they had a green light to act.

The reasons for this action by the United States has been hotly debated and remains controversial to this day. The widow of the murdered Ngo Dinh Nhu, Madame Nhu, the unofficial First Lady of South Vietnam, maintained that Kennedy made a major blunder in supporting the coup because Diem had been uncooperative. She held that it was the success of the policies of the personalist regime that caused Kennedy, who had been embarrassed by the Bay of Pigs invasion and the Cuban missile crisis, to get more involved in Vietnam thinking the battle was pretty much won and he could take credit for the success himself. In any event, whatever the motivation, it was a disastrous mistake. Despite all of the controversy surrounding him Diem had brought stability and a unity of purpose to the South Vietnamese government. He had held power from 1955 to 1963. After his murder, in only one year, South Vietnam went through seven changes of leadership, all military men or in one case a civilian appointed by the military. In one year leadership went from General Duong Van Minh to General Nguyen Khanh, back to Duong Van Minh, back to Nguyen Khanh again, then to a military committee, then to Duong Van Minh a third time and finally to the elderly Phan Khac Suu before the administration of President Nguyen Van Thieu (also a former general) who held power from 1965 to 1975.

With this sort of political chaos going on in Saigon, the U.S. had to take charge of the war against the communists and the complaints that had become common under Diem only increased as the government in Saigon changed hands so rapidly and became known for graft as much as leadership but even at its best overshadowed by the role of the United States. It would be hard to argue that the loss of President Diem was good for anyone, the South Vietnamese or the Americans. No less a political mastermind that the Communist President Ho Chi Minh said that he could not believe the Americans had been so stupid and predicted that they would never find another strong national figure capable of filling the shoes of President Diem. In this, as in many other ways, history would prove Ho Chi Minh correct. 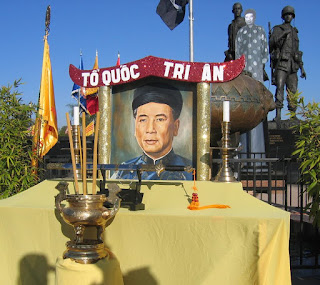 I find it rather fitting that this anniversary should come on election day in the United States considering that it was a U.S. backed and blatantly rigged vote that brought Diem to power and later the U.S. that supported the coup that brought him down, cost him his life and ended up being the ruin of their own cause as well.
Posted by MadMonarchist at 3:03 AM