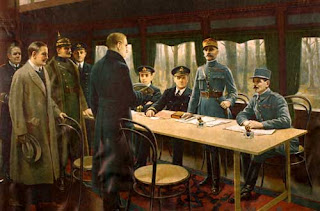 It was on this day in 1918 that the fighting officially ended on the western front, bringing an end to the First World War, a conflict which, few would deny, put the final nail in the coffin of the old, traditional Europe. The human cost was beyond imagination and only surpassed 20 years later by World War II. Even then, many countries lost far more troops in the First World War than in the Second. In addition to the individual lives that were lost the conflict was also the end of an era in world history and certainly western civilization. By the time it was over the German Empire was gone, the Austro-Hungarian Empire was gone, the Russian Empire was gone and the Ottoman Empire would soon be. Revolutionary communism had been set loose on the world, ethnic nationalism was set looose in the Balkans and the Middle East, the United States had been drawn out of isolation to become a world power and faith in traditional institutions had been shattered. In the end, when it was all over, people -and not a few- looked at the millions of deaths, the fallen civilizations, the political and social chaos and asked; was it all worth it?

That remains something to struggle with even now, at least for those willing to give it sincere thought. Was the pride of Serbia worth such a horror? Was Alsace-Lorraine? Any given cause seems pretty small and inconsequential when weighed against the millions of casualties and fallen empires. Finding someone to blame is never as easy as it seems in such cases though there were certainly guilty parties. The murderers of the Archduke, the Austrian Foreign Minister, the French ambassador in St Petersbu 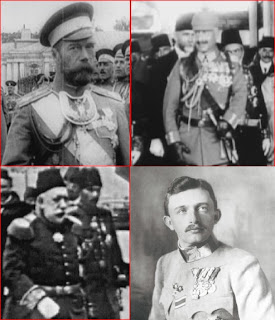 rg, the German "blank check" and so on can all be justly blamed along with other individuals and actions. However, even if one were to say that Serbia should have been crushed that Europe might live or that Belgium should have been sacrificed so that more peoples could have been saved -it still doesn't add up. The simple reason being that if the Archduke had not been murdered Austria-Hungary and Serbia would have found another reason to fight. So long as Serbia made Austria her enemy to advance their goal of a "Greater Serbia" and so long as the Austro-Hungarian military advocated the elimination of Serbia once and for all they were going to find an excuse to have at each other. Likewise, so long as France seethed over the loss of Alsace-Lorraine they would have sooner or later found some excuse for fighting Germany. Britain had long wanted to eliminate the naval and industrial competition of Germany and if Belgium had not been violated they could have found another reason.
As I see it, the question as to whether the conflict would have been a world war or just another Balkan war was decided by Russia. Some may (and have) disagreed with me, but Russia was the first power to threaten intervention in what was an Austro-Serbian conflict. Germany, of course, had voiced support for her Austrian ally but the Germans were not about to intervene with military support to help the Austrians. No one would have expected Austria-Hungary to need any help defeating Serbia (though as it turned out the Serbs were a tougher nut to crack than anyone had imagined) but Russia was ready to send in troops to support her fellow Slavs. That does not mean that the fault lies only with Russia of course but as I see it there would have been no wider war if Russia had washed her hands of Serbia and let them take their punishment from the Austrians. How that scenario would have progressed, who can say? What can be said with a fair amount of certainty is that once Russia intervened some countries spread the war freely but others were locked in. Germany was bound to help Austria fend off the Russian attack and France was bound to help Russia which meant Germany was bound to invade Belgium to have any chance of success in fighting both.
Britain chose to join in (contrary to popular perception she was not actually obligated to defend Belgium), the Ottoman Empire and Bulgaria chose to join in and, let us be honest, Italy and Romania were effectively bribed into coming in. Lest this all be too depressing we can at least find some virtue in the fact that the soldiers at least had pure motives; duty, patriotism, love of country and so on. In most cases the monarchs felt they had no choice in the matter. Emperor Francis Joseph was lied into war when you come down to it. The Tsar struggled terribly over the decision. The German Kaiser tried to call the whole thing off but was defied by his top general. King George V was not really making the decision to go to war and Albert I of the Belgians simply had it thrust upon him. Sultan Mehmed V thought it was a terrible mistake but was not really the man in charge anymore either. However, if some nations were forced into the war the absolute disaster that was made of the peace was forced on no one but the defeated. That is where perhaps the greatest tragedy of the armistice truly resides.
No one forced the major allied leaders to commit the muddled stupidity that resulted in the Treaty of Versailles. It was just the sort of incoherent mess that one could expect to come from the collaboration of a manipulative Welsh socialist, a vindictive French radical (former communard) and a preachy American progressive with no concept of reality. Whereas the Congress of Vienna that ended the Napoleonic Wars was presided over by conservative, practical statesmen, the conference at Versailles was presided over by deceptive, inconsistent, ideological liberals all with conflicting views and goals. No one left happy, no one left satisfied, even on the winners' side and honestly I am sometimes amazed that it only took twenty years for war to break out again. But that's another story. In any event, the conflict that brought down four empires, the war to end war that resulted in a peace to end peace came to a close 92 years ago today. We are still struggling to repair what was destroyed on that day.
Posted by MadMonarchist at 12:22 AM