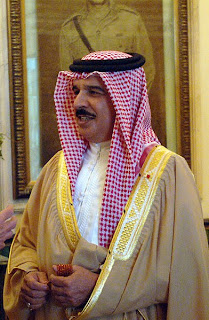 Name: The Kingdom of Bahrain
Reigning Monarch: His Majesty King Hamad bin Isa Al Khalifa
Reigning Family: Al Khalifa dynasty
Status: Bahrain is a constitutional monarchy that has been ruled by the Al Khalifa family since 1783. There was a period of Persian rule and colonial ties with Portugal prior to Bahrain becoming a protectorate of the British Empire until 1971. Originally the monarch was simply referred to as “ruler” and later Bahrain became an emirate until 2001 when a constitution was adopted and the emir was elevated to the status of King of Bahrain. Prior to this Bahrain had been a fairly typical Islamic absolute monarchy but the new constitution reestablished the National Assembly, provided for greater democracy (women being given the vote) and allowed women to run for political office. However, princes still occupy most high government offices. Some 80% of cabinet members are princes and while the lower house of the legislature is elected the upper house is entirely appointed by the King. Islam is the official religion and the constitution guarantees freedom of religion though in practice some limitations exist. The King must ratify all bills to make them law. Officially there are no political parties in Bahrain but the “political societies” amount to the same thing.
Posted by MadMonarchist at 12:14 AM