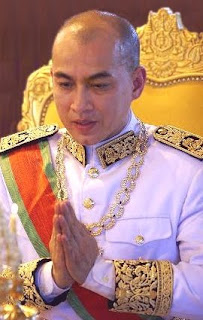 Name: The Kingdom of Cambodia
Reigning Monarch: His Majesty King Norodom Sihamoni
Reigning Family: House of Norodom
Status: Cambodia is a constitutional monarchy though the same party and prime minister have held actual political power through every “election” since the monarchy was restored in 1993. In the past Cambodian kings held absolute power but this changed during the colonial period when Cambodia was part of the Union of Indochina within the French colonial empire. Cambodia gained independence from France in 1953 and, unlike neighboring Laos or Vietnam, her monarchy managed to survive. Kings were held to be sacred and semi-divine in Cambodian history but today the King is a ceremonial figurehead of state with no political power. The King acts as a symbol of unity and goodwill while the regime in power controls the government. “Great King” Norodom Sihanouk, however, was able to prove that royal influence remains considerable due to the great popularity of the Cambodian monarchs. The King in Cambodia is treated with seriousness and respect by the government, is widely revered among the public, especially the rural people, and devoted his time to representing his country abroad and helping the Cambodian people with their problems on an individual basis.
Posted by MadMonarchist at 12:11 AM