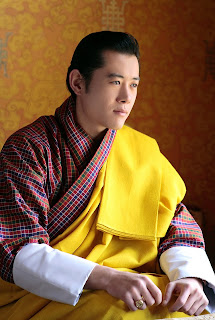 Name: The Kingdom of Bhutan
Reigning Monarch: His Majesty King Jigme Khesar Namgyel Wangchuck
Reigning Family: Wangchuck Dynasty
Status: The Himalayan Kingdom of Bhutan, “land of the thunder dragon” was previously a Tibetan Buddhist theocracy with a sort of dual-government until 1907 when Ugyen Wangchuck was chosen by the noble and religious leaders as “Dragon King”. Britain recognized their new monarchy and in 1910 established a treaty with Bhutan, effectively making them a British protectorate. Bhutan was originally an absolute monarchy but with very strong religious ties as the country is devoutly Buddhist. For many years Bhutan was happily isolated from the rest of the world, carrying on their traditions and living as they had always lived. However, King Jigme Singye Wangchuck began giving up his political powers as king and started the process of transitioning Bhutan from an absolute to a constitutional monarchy despite the lack of any public outcry for such a change. Most administrative power went to the national assembly, including the right to impeach the king with a 2/3 majority vote. The first political parties were formed and in 2008 the first elections in Bhutanese history were held. The country has also been opening up dramatically to the outside world allowing in foreign entertainment, foreign fashions, foreign thinking and more foreigners themselves with increasing tourism. Candidates for the Council of Ministers are chosen by the King but must be elected by the National Assembly.
Posted by MadMonarchist at 12:18 AM