Brief Reflection on Christ the King 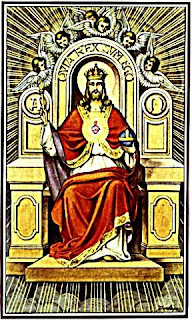 When His Holiness Pope Pius XI instituted the Feast of Christ the King it was remarked on at the time as a very odd thing to do. Since the revolutionary period and certainly since World War I the title of “king” had become a rather unpopular one throughout the world and yet the Pope chose this aspect of Christ to emphasize. It made many people uncomfortable. Jesus as a prophet, as a teacher, a healer and Jesus the meek servant was perfectly acceptable but Jesus Christ as King of kings and Lord of lords, a figure of authority, a judge and the dispenser of divine justice; that was not the image of Jesus most at the time, and most still today, preferred to consider. However, the Pope looked at the world of 1925 and saw this aspect of Christ as one that needed to be remembered and not only remembered by emphasized every year in the Church calendar.

Up to this point Pope Pius XI had seen Christians persecuted for their faith by secularist governments around the world with particular atrocities being carried out by the forerunners of the PRI in Mexico, by the leftist republicans in Spain and by the communists of the Soviet Union. Secularism was spreading and this threat so concerned Pius XI that he devoted his first papal encyclical to the subject. As he saw it the world needed a reminder that Christ was the King of kings. The communists and egalitarians on the left needed to know that the divine order was hierarchical, that there was a King in Heaven that ruled all, like it or not, and could not be overthrown. Likewise, the nationalists on the left and the right needed to know that Christ was King of all and that His reign was for all nations and all times. Christ the King was above any one nation and above any state no matter how totalitarian.

It was also an obvious shot across the bow at the whole revolutionary, republican mentality that had been growing so consistently. The kingship of Christ was to symbolize that Christianity is an all-encompassing religion and that no part of the life of any Christian, whether their private behavior, their public institutions or how they order their life and their society, is beyond the rule of Christ the King, their divine sovereign in Heaven. This was a message the world needed to hear in 1925 and as much, if not more so, still today. In our growing secularism, egalitarianism and internationalist centralization today the message conveyed by the symbolism of Christ the King remains crucial.
Posted by MadMonarchist at 7:01 AM