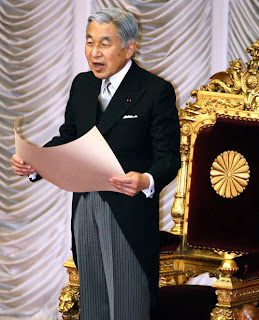 Name: The State of Japan
Reigning Monarch: His Imperial Majesty Emperor Akihito
Reigning Family: Yamato dynasty
Status: Japan has been a constitutional monarchy since the time of the “Meiji Restoration” but a new constitution was adopted after World War II and the transition of the country from the ‘Empire of Japan’ to the ‘State of Japan’. The Emperor has no political power or real role in government. It is even debatable whether he is the actual Head of State of Japan though he certainly fills that role. According to the constitution, the Emperor is the “symbol of the state and the unity of the people”. He is specifically denied the title of “sovereign” as in the new constitution popular sovereignty was adopted. He appoints the prime minister but has no choice in who is appointed nor can he refuse to appoint the designated individual. However, the Emperor is still a central figure in the native Shinto religion, still held by some to be a descendent of divine figures and the living embodiment of the Japanese nation. In general the Emperor and Imperial Family in Japan are spoken of only in formal and respectful tones and debate about the monarchy can still excite deep passions amongst the Japanese people. The imperial monarchy of Japan is the oldest hereditary succession in the world, dating back to traceless antiquity and most could not imagine Japan without an Emperor. His presence, regardless of actual authority, has been an anchor of stability in radically changing times.
Posted by MadMonarchist at 12:20 AM