More of My Fan Mail 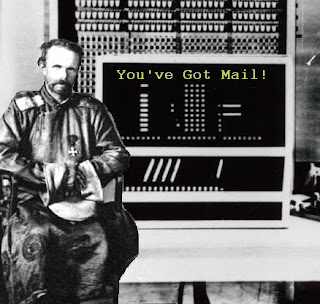 Yes, The Mad Monarchist is still getting plenty of mail from my adoring fans. Since everyone seemed so impressed the last time, I decided to post some of the praise I have been sent since then. See how I am loved:
You are a liar piece of ****!
[short and to the point]

You are the most stupid ignorant person living in USA
[Wow! I would call that an accomplishment! Think of the competition I beat out.]

MadMonarchist IS A LIAR!
Go back to read more books of history
[A pity this helpful fan did not mention what I lied about]

MadMonarchist or you have nothing smar tot say.
[Someone got a computer for their kindergarten graduation!]
I love how you cry about communism killing when Capitalism killed over a billion people. Yeah blind eye right?
[These are quite common but this one was directed at me rather than the point being made. I'm sure that this person is absolutely right -and the Berlin wall was built to keep the West Germans out...]

I Hate This BLOGGER
What the Hell you Are
You’re not thai You’ll never understand why we have The Monarchy
GOOD Monarch NOt bad Monarch At ALL
Come To me I’ll Knock your whole family down
[Either someone was using a bad web translator or being 'knocked down' means something alot worse in Thailand. I'm more confused by the fact that someone would say this to your humble blogger who has always been a defender of the revered King of Thailand]
You're a homophobic ****. Watch your back ******.
[Somehow I doubt it is my 'back' that would be in danger around this guy]

I get tired of people like you who are so stupid to think Hitler was not a right-wing guy or anything like us democrats.
[Never mentioned the democrats as being nazis, of course I often condemn socialism so I suppose it is only natural he assumed I meant the Democrats]

WOW! Well maybe you should all just grow up out of that little bubble you try so hard to make and inside of it you fester upon things that that you have absolutely NO right to be talking of in such a way. So before you even venture to continue this charade go back to school and learn your history.
[written by a big fan of Jack Chick who in his own extensive schooling did not seem to learn about run-on sentences]

Mad Monarchist you have absolutely NO understanding of the Imperial House of Russia. Everything here is lies!
[And again I am afraid my lies will continue until one of these people bothers to be specific]

Up your @ss tight wade!
[One of my favorites, the misspelling giving it that little something extra. Was this someone who asked me for money sometime?]
Posted by MadMonarchist at 12:21 AM