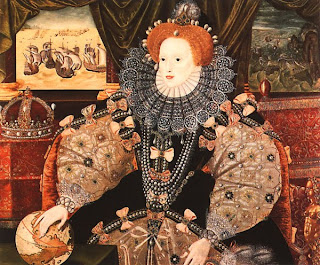 It was on November 17, 1558 that Elizabeth I, of the House of Tudor, became “Queen of England, Ireland and France”. There was a time, years ago, when I was a struggling university student pepped up on classes in British literature, Tudor history and the like that my admiration for “Good Queen Bess” was so complete as be approaching idolatry. Because of some personal changes and deeper studies my opinion has certainly modified since then. “Good Queen Bess” was not all that good to certain peoples and segments of society nor was she responsible for most of the great achievements of the Elizabethan Era. In fact, she was a quite indecisive ruler who tended to put things off until they resolved themselves or someone else resolved it for her. She was also quite irresponsible as a monarch in many ways, particularly in her refusal to secure the succession by either marrying and having children or naming an heir to the throne. There was also the execution of Mary Queen of Scots which I, as a monarchist, have a huge problem with and the trial and execution of one sovereign monarch by another is not something I am going to ever get past. Trust me.

Now, having said all of that, Queen Elizabeth I still must stand out as one of the most significant, effective and success monarchs of England. She was a woman of great political instincts, great determination and was one of the greatest monarchs ever, in my opinion, when it came to mastering the public image of monarchy. If the almost divine image of the “Virgin Queen” is not completely accurate the Queen still deserves a great deal of credit for putting that best possible image forward and making it stick. If every monarch were so talented in the area of public relations republicans would positively be an endangered species if they exist at all. Some have attributed this to post-Elizabethan writers embellishing the accomplishments and popularity of Elizabeth I, and that may be true to some extent, but it is certainly not the whole truth. The abilities and accomplishments of Elizabeth I were widely recognized in her own time and even by her enemies. The Pope famously said that if only Elizabeth I were Catholic she would be their “most beloved daughter” and noted that while ruling only half an island she had made herself feared by France, Spain and the Holy Roman Empire. She was evidently doing something right.

Above all, Queen Elizabeth I was a very pragmatic ruler. On the religious question she was not known for firm convictions. Before coming to the throne she had declared herself a Protestant and a Catholic depending on who held power. She was always opposed to the more extreme Protestants yet she recognized that it was the anti-Catholics who were her base of power and so she was certainly never going to be friendly toward the Catholic Church. There were terrible persecution of Catholics though it was not as bad as it could have been. In the area of politics she was also more practical than principled. She supported Protestant rebels in Scotland to keep the pro-French regent and queen there in check, she supported the Dutch against the Spanish to keep Philip II occupied and supported the Protestants in France for the same reason. Her support for the ‘English Sea Dogs’ against Spanish shipping also helped thwart a powerful enemy without a direct confrontation. The defeat of the Armada was a pivotal event in English history and while she may not have been directly responsible for that, in as much as she would be blamed if the Armada had succeeded she deserves credit for its defeat. She opened trade with the Muslim world, sending arms to Morocco, as a way to support their war against Spain and she sent the first English ambassador to the Ottoman Empire who were at that time almost constantly at war with the Empire. For a time she even considered a military alliance with the Turks against the Spanish but nothing ever came of it.

It was during the reign of Elizabeth I that there also first came to be complaints over various methods of the Crown for obtaining funds without the support of Parliament which led to some problems. However, the Queen was very adept at dealing with this problem with a speech to Parliament that played on emotions, protesting her ignorance of the corruptions that existed and of her boundless love for her people and her country. This was no long-term solution and as we know the problem would arise again and again after Elizabeth was gone, coming to a head under Charles I. This, in a way, relates to the only negative aspect of the Queen’s mastery of public image and public relations. The devotion was to her personally, Gloriana, the iconic embodiment of England and English greatness and as happens this meant that such loyalty was not focused on the monarchy and would not carry over to her successor. This was exacerbated by the fact that there was no Royal Family to speak of and the only potential successor was the King of Scots at a time when suspicion of all foreigners had been purposely aroused. The precedent set by the trial and execution of Mary Queen of Scots would also have severe repercussions later on as well.

Again, I have serious “issues” with Queen Elizabeth I and yet her significance cannot be denied and regardless of how one feels about her, Elizabeth I was obviously a queen of exceptional talent. Under her reign England again became a country that mattered after years of decline since the latter years of Henry VIII. Under her England mastered the sea, undermined Spanish power in such a way that Spain would decline and England would rise on the world stage as well as gaining a valuable lead on the French by playing off factions against each other. Her enemies could not help but admire her and even many of those she had executed went to their deaths pledging their loyalty to her. She embodied her country in such a way that her Protestant subjects all but worshipped her and even her Catholic subjects rallied to her against the Armada. She left England, if not the monarchy, stronger than she found it and left a legacy that no other British monarch has ever matched.
Posted by MadMonarchist at 12:22 AM