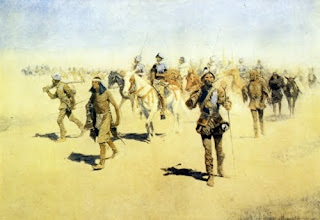 When most people think of the first Thanksgiving in North America they usually think of dour, grim-faced Puritans in New England, the revolutionary general George Washington or President Lincoln ordering a day of thanks for the victories of the Union armies in the Civil War. However, Texans know that it was actually our country which was home to the first Thanksgiving, carried out by missionaries and conquistadors rather than Puritans, all loyal forces of His Catholic Majesty the King of Spain. It was on April 30, 1598 near what is now the West Texas city of El Paso and the man responsible was Juan de Oñate. He came from a well regarded family long known for their loyal service to the Spanish crown. His father had discovered and developed the mining industry in Zacatecas, Mexico and Juan de Oñate opened the mines in San Luis Potosi and carried out numerous duties for the King of Spain. However, he had itching feet as the old timers would say and longed to make a name for himself as an intrepid explorer. Monarchists may also be interested to know that Juan de Oñate was married to Isabel de Tolosa, the granddaughter of Fernando Cortes and Isabel Montezuma who was herself one of the many children of the famous Aztec Emperor Montezuma II. 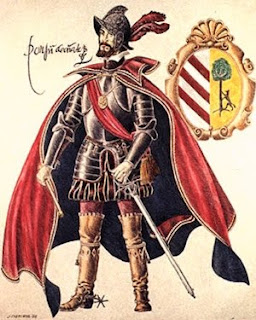 Juan de Oñate was given a land grant in the unexplored lands of the northern Rio Grande Valley among the Pueblo Indians by the Spanish Viceroy. However, when that post changed hands the plans for an expedition were put on hold until final approval came in 1597. That summer Juan de Oñate send Vicente de Zaldivar to blaze a trail from Santa Barbara in southern Chihuahua along a route north that would have available food and water. Poor Zaldivar had a rough time of it, suffering a great deal from the elements, privation and even being captured for a time by hostile Indians but he persevered in his duty. Today this original route is now the main highway between Chihuahua, Mexico and El Paso, Texas. In early March of 1598 Juan de Oñate set out on his expedition with 500-600 Spanish soldiers, colonists (women and children included) and about 7,000 head of livestock. They endured immense hardships as they tramped north over 50 miles of rough terrain. By the last five days they had run out of water and were scrounging for roots and cactus and all were nearly dead from dehydration before they reached water.

After reaching the Rio Grande at or about San Elizario the column rested for ten days after which time Oñate ordered a special feast of thanksgiving to God for their survival. Wild game was shot, fish was provided by local Indians and everything was set for a traditional Spanish fiesta. First a special mass of thanks to God was said by the Franciscan missionaries who accompanied the expedition and Juan de Oñate also took the occasion to formally claim possession of the lands drained by the Rio Grande for Almighty God and King Philip II of Spain. Everyone feasted and celebrated around a great bonfire. A member of the expedition wrote, “We were happy that our trials were over; as happy as were the passengers in the Ark when they saw the dove returning with the olive branch in his beak, bringing tidings that the deluge had subsided”. Once the thanksgiving feast was over Oñate and his intrepid band continued north to settle near what is now Santa Fé, New Mexico.

So, for all of you who have not heard about this before, consider yourself enlightened as to the real “first” thanksgiving in North America. Instead of Pilgrims in black hats and white collars picture brown-robed Franciscans and Spaniards in comb-morion helmets. Instead of George Washington in 1789 or Abraham Lincoln in 1863 picture King Philip II in 1598. Now, to be fair, monarchists are correct to point out that the New England pilgrims did begin their famous “Mayflower Compact” with a declaration of loyalty to King James I of Britain, but given their adamant religious dissent, their flight to Holland and then to America, I do not think any would take the Pilgrims for ardent royalists and, indeed, in the English Civil War of later years the Puritan area of New England was the most firmly anti-royalist region of all the English colonies in America. For that reason, not only as a proud Texan but a monarchist as well (and there are other reasons) I prefer to remember the actual ‘first thanksgiving’ on the Rio Grande rather than the Puritan affair of New England.
Posted by MadMonarchist at 12:21 AM

Email ThisBlogThis!Share to TwitterShare to FacebookShare to Pinterest
Labels: holiday, Spain, texas, thanks