Who Would Hate a Happy Couple? 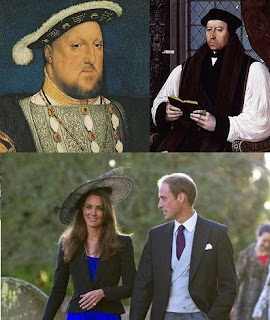 I find it rather outrageous that anyone could react with anger, disdain or hostility over the announcement of an engagement of any two people. An impending marriage should be viewed as a happy occasion and met with best wishes from all. Sadly, this does not seem to be the case these days even with the British and Commonwealth Royal Family. Again, I find it distasteful that anyone, from any country, would take such an occasion to be negative but I was even more disturbed to find such attitudes exhibited, not only by British and Commonwealth subjects, but even those who are actually in the employ of the Crown! Two cases stand out as particularly outrageous because of their origins.

A bishop of the Church of England, Pete Broadbent of Willesden, compared the young couple to “shallow celebrities”, bemoaned the potential cost of a royal wedding to the British public and sneered that the House of Windsor was full of “broken marriages and philanderers”. He said that when a date for the wedding was announced he would take a republican holiday to France. To rub further salt into the wound he predicted the marriage would fail after seven years. What a “Christian” attitude for a bishop to take! This makes my blood boil and I am not comforted in the least by the comment from Lambeth Palace that the bishop is “entitled to his views”. My response to that would be, “the Hell he is!” This man (I use the term lightly) is a bishop of the Church of England, the established church of his country. I wonder if he has forgotten that it was a philandering royal with a string of “broken marriages” to his credit that is responsible for there being a Church of England in the first place.

This reveals how far the Church of England has fallen from the pedestal of its foundation. From its inception the Anglican church was based on Christianity and non-resistance to the royal power. Today we see that not only has Christianity been fairly well eradicated from the Church of England but alarming progress has been made in eradicating monarchism from it as well. For a church founded by a king, based on non-resistance to royal power and which still maintains Her Majesty the Queen as Supreme Governor of the Church of England I can think of no better evidence of the fact that the Anglican communion will very soon be reduced to dust and the Church of England disestablished and left to die a lonely death. Quite apart from the religious issues this treasonous tirade by an Anglican bishop serves as quite stunning evidence of how completely the Church of England has abandoned its own roots, turned against its core principles and effectively cut its own throat. When this disgrace of a bishop goes to France for his republican holiday he would do well to recall the horrific bloodlust that came with republicanism and the French Revolution, a Reign of Terror that the British kingdoms were spared from.

The bishop has since apologized for his remarks (made on Facebook) both for their content and the public forum in which they were made but it is noticeable that he did not apologize for the content -something public figures have become quite good at in recent days; uttering meaningless apologies for offending without actually admitting they were wrong about anything. He wished the couple success in their marriage and said he would be praying for them. Oh, spare me your public piety Pharisee! The fact that an Anglican bishop would even think of saying such a thing is outrageous and says a lot about his church and his own character as does the dismissal of the issue by Lambeth Palace which evidently has also lost track of why they hold a place of privilege to begin with and which side of their bread is buttered.

So much for the clergy, what about the political class? A member of the Mad Monarchist Brain Trust drew my attention to the treasonous remarks of Greater Manchester senior councillor Mike Connolly who referred to Prince William and his bride-to-be as “multi-millionaire parasites” in comments posted on his Facebook account. Following a public outcry he issued an apology for his words but nonetheless retracted none of the sentiment behind it, expressing his hopes that the Royal Family would pay for the upcoming wedding rather than the British public. His only given reasoning for this was that the “local people and hardworking families” he knew had to pay for their own weddings and so the royals should do the same. Of course, by that same logic royals should be able to travel as they wish, speak out on any issue with any opinion they wish, lobby the government and exercise all of the other rights and privileges enjoyed by “local people” but denied to members of the Royal Family. Somehow I doubt Mr Connolly would hold this same opinion if a member of the Royal Family came to help organize opposition to his reelection and campaign for his challenger.

More striking to me than this, though, is that this man who refers to the royals as “multi-millionaire parasites” is himself, as a politician, a parasite on the body of the British taxpaying public. This basic truth seems lost on the entire republican population. They also are willingly ignorant of the fact that the private income surrendered by the Queen in return for a public allowance is far greater than the amount the Queen receives from the British taxpayer. This, of course, is an old argument and not one monarchists are likely to gain much ground with so long as the prevailing media in Britain and around the world continues its stubborn refusal to state the facts about royal finances and the Crown Estates. However, all of that seems to me to be a less frightening fact of life than the basic lack of national pride, the free allowance of such ardent opposition to the fundamental basis of British life and government which these individuals reflect. The fact that anyone serving in public office in Great Britain would voice such vile opposition to the very foundation of their country and their government says a great deal about the state to which the western world today has fallen.
Posted by MadMonarchist at 12:13 AM