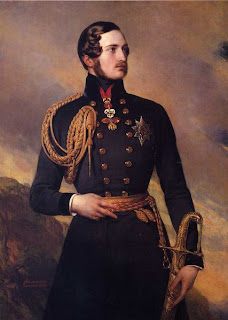 One of the most significant consorts in the history of the British monarchy was Queen Victoria’s Prince Albert. He was born on August 26, 1819 in the Duchy of Saxe-Coburg-Saalfeld, Saxony, the son of Duke Ernst III. Coincidentally, the same midwife who delivered Albert shortly thereafter also delivered his future bride Victoria. When Albert was still only a boy a re-shuffling in the ducal family made his father Duke of Saxe-Coburg-Gotha. Family life was not exactly ideal for the young prince with his parents separating and his mother finally being banished from the country. Still, Albert grew up as normally as one could expect and as a young man went to the University of Bonn. He excelled in a wide variety of academic subjects and sports and began to form his opinions which were rather liberal for the time. In 1836 Albert became a subject of interest as a potential husband for his cousin Victoria who was set to inherit the British throne from her uncle King William IV.

Victoria’s uncle, King Leopold I of the Belgians, thought Albert would make a good husband and arranged a meeting. King William IV, however, wanted Victoria to marry a son of the Dutch King Willem II. However, Victoria herself found Albert the much more attractive choice. In 1837 Victoria became Queen and already had her heart set on marrying Albert, however, it was not until 1839 that the couple were formally engaged and they married in 1840. His initial reception in Britain was a cold one. The public were not impressed with a German marrying their Queen and Parliament voted him the smallest allowance ever given to a consort, would not hear of making him “King consort” and even refused to grant him a title in the peerage. Prince Albert shrugged off these snubs, happy enough with his own title, and content with the love of his wife who was absolutely devoted to him. It was not until 1857 that he was formally given the title of “Prince consort”.

This all reveals the extent to which Prince Albert was charting new waters in his role of husband to the Queen. Dealing with the spouse of a Queen regnant was not something the British had a great deal of experience with. It says a lot that their most beloved Queen regnant never married. Prince Albert was happy enough but early on felt rather bored and unused. Still, the succession was secured for the House of Saxe-Coburg-Gotha. Queen Victoria was pregnant within the first two years of her marriage and ultimately the couple would have nine children. The Queen’s total devotion to Albert and his own displays of competence and liberal views finally began to win over those in power in Great Britain and his influence grew. He was a great source of strength to the Queen at a time when it was needed. There were several attempts on her life and, though few realize it today, the historic height of British republicanism was actually during the Victorian era.

Prince Albert had a vision of royalty as being involved in government but furthering “enlightenment” principles. He was a champion of the rights of workers, improvements in education, social welfare, the abolition of slavery and so on. It was in part because of his often stated point of view that the royals and high-born of society had a duty to help the poor and downtrodden that helped Britain avoid major upheavals during the revolutions of 1848. He helped in modernizing the army and tried to encourage a diplomatic solution to the problems between Russia and the Ottoman Empire though this effort was unsuccessful and Britain ultimately joined what became known as the Crimean War. The public image of Prince Albert suffered because of this perceived hesitancy to fight. He also helped calm relations with the United States in 1861 when the two countries were on the bring of war.

Ruffling feathers was nothing new for Prince Albert and it did not bother him. He was a very idealistic man who felt obligated to do what he could to advance those ideals. He arranged the marriage of the Princess Royal Victoria to Crown Prince Friedrich Wilhelm of Prussia (the future Kaiser Friedrich III) specifically to try to encourage the spread of liberalism in conservative, militant Prussia. His promotion of education and educational reforms were widely applauded but he also encouraged religious opposition when he extended this support to new ideas that called the reality of God into question. His proposal that Charles Darwin be knighted was not well received. However, Albert’s own confrontation with mortality was not far off.

By the time Prince Albert was helping diffuse a possible war with America in 1861 he was already gravely ill with typhoid fever. On December 14 in Windsor Castle he passed away with Queen Victoria and five of their children around him. Queen Victoria was devastated by his loss and probably no other consort in Great Britain has had the lasting impact of Prince Albert. Monuments and memorials to him abound and in many ways he set the trend that subsequent generations of the British Royal Family would follow.
Posted by MadMonarchist at 12:18 AM