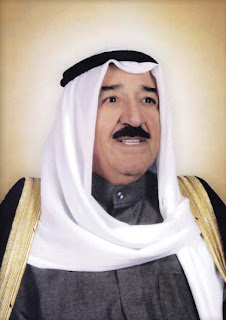 Name: The State of Kuwait
Reigning Monarch: His Highness Sheikh Sabah Al-Ahmed Al-Jaber Al-Sabah, Emir of Kuwait Reigning Family: Al-Sabah dynasty
Status: The Al-Sabah family have ruled the area that is Kuwait since 1756. From 1899 to 1961 Kuwait was a protectorate of the British Empire. Kuwait is a constitutional monarchy (an emirate) with the oldest directly elected parliament in the Persian Gulf region. However, the Emir of Kuwait has extensive powers and is effectively an absolute monarch. He appoints the prime minister and government officials, he can dissolve the National Assembly and in times deemed necessary can dispense with the elected government altogether and rule in his own right. According to the constitution the Emir is sacrosanct and opposition or disrespect toward him is not tolerated. The National Assembly must approve heirs to the throne and there have been clashes between the Assembly and the Emir over the extent of their powers in a number of areas. Political organizations are illegal but effectively parties do exist. In 1990 the Emir was deposed by invading Iraqi Republican forces but was later restored by an international coalition. Politics in Kuwait have been more highly scrutinized since that time.
Posted by MadMonarchist at 12:17 AM