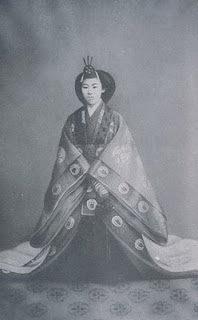 Empress Teimei of Japan was born on June 25, 1884 as Sadako Kujo in Tokyo, the fourth daughter of Prince Michitaka Kujo (of the Fujiwara clan) and Noma Ikuko. She lived in something like a well-to-do foster home as a child, which was not unusual and had a good education for her time and place (incidentally it was Empress Shoken who was the first to emphasize education for girls in Japan). In 1900, at age 15, she was engaged to HIH Crown Prince Yoshihito and the two were married later that year on May 25 in a traditional Shinto ceremony. Her attention to detail, attentive service and good health had recommended her for this post as the Crown Prince, early on, was seen to be of rather delicate health. The Meiji Emperor himself had selected her, noting her intelligence, how well spoken she was, her friendly nature and regal bearing. It was hoped that all of this together could compensate for the shortcomings of the imperial heir. Nonetheless, arranged matter of duty though it was, their married life got off to a good enough start, living in the Akasaka Palace that had been especially constructed for their use in Tokyo, noticeably outside of the walls of the Imperial Palace.

The following year Crown Princess Sadako gave birth to an heir to the throne, HIH Prince Hirohito (future Showa Emperor of Japan). This might not seem all that significant but it was actually the first time that the official wife of a crown prince, rather than a concubine, had given birth to an heir since 1750 during the reign of Emperor Momozono. Three more sons followed in the succeeding years and the great success of Princess Sadako as a wife and mother went a long way to establishing monogamy as the new prevailing tradition in the Japanese Imperial Family. Although taken for granted in the west, imperial concubines were a tradition running back for uncounted centuries and the fact that it ended simply because her husband saw no need for concubines says a great deal about what an extremely successful consort Princess Sadako must have been. It was only fitting then that she soon got a promotion. On July 30, 1912 Crown Prince Yoshihito ascended the Chrysanthemum throne as Emperor of Japan and Crown Princess Sadako became Empress.

As Empress, Teimei (her posthumous era name meaning “enlightened constancy”) continued to be the ideal Japanese wife. She ran an efficient household, supported charities such as establishing a hospital for those with leprosy, was very caring toward her husband and remained rather reserved and out of sight. However, to stop there would be to reinforce a stereotype. She also accompanied her husband on his travels around the country, becoming ever more attentive in caring for him as his health and mental faculties began to fail and even stepped in to fulfill some of his duties temporarily when needed; something rather unprecedented. Many might have been fooled into thinking her a weak character because she was most often seen rather than heard, but they would be wrong. Empress Teimei had her own ideas and very strong convictions but expressed them in ways that would not cause a spectacle. She also carried on caring for her husband as she always had, dutifully as ever, until his death on December 25, 1926 after which her son became Emperor and she became Dowager Empress.

During the reign of her husband Empress Teimei had been a very central figure but now she was somewhat sidelined, however, she still made her feelings known. The growing militarism in the government and aggressive policies troubled her greatly and in yet another break with tradition she openly objected to Japanese involvement in World War II. This obviously caused tension between her and her son who felt obliged to follow the advice of his government ministers. The opposition of Empress Teimei was well known in the circles of power but as the “widow of the former emperor” and mother of the current monarch she was sacrosanct and inviolable. As she had no political power the new militarists tried their best to ignore her. However, as the war went on and she became more convinced (along with others) that Japan was marching to her doom, the Empress decided she had to take some action. Together with her son, HIH Prince Takamatsu Nobuhito, Empress Teimei helped engineer the downfall of the militarist Prime Minister Hideki Tojo who was later hanged by the Allies for war crimes.

Empress Teimei lived through a great many changes in Japanese national life and herself played a larger part in the events of history than most at the time knew. She lived to see her grandchildren get off to a good start before her death at Omiya Palace in Tokyo on May 17, 1951 at the age of 66. She was buried at the Musashino Imperial Mausoleum in Tokyo next to her husband the Taisho Emperor, to the last a woman of compassion, duty, subtly and strong convictions.
Posted by MadMonarchist at 12:20 AM