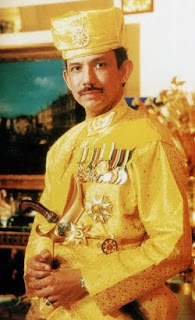 Name: The State of Brunei, Abode of Peace
Reigning Monarch: His Majesty Sultan Hassanal Bolkiah Mu’izzaddin Waddaulah
Reigning Family: House of Bolkiah
Status: Brunei is an Islamic absolute monarchy on the island of Borneo. The line of sultans goes back to 1405 and the Sultan of Brunei today is one of the wealthiest men in the world and certainly the most powerful man in his country. The Sultan of Brunei holds total executive power as both the head of state and acts as his own prime minister. Since 1962 he has also held emergency powers and the offices of minister of defense and finance. In March of 2006 the Sultan enacted a constitutional amendment to make himself legally infallible. Since 1991 the prevailing ideology has been known as ‘Malay Islamic Monarchy’ which stresses the role of the Sultan as ‘defender of the faith’ which is, in Brunei, Sunni Islam. Brunei was once a fairly extensive empire but lost power to Sarawak and until 1984 was a protectorate of the British Empire. Strong ties still remain between Brunei and the United Kingdom. The British had helped put down a rebellion in 1962 connected to the refusal of Brunei to join the Malaysian Federation. The great wealth of the Sultan comes from the oil wealth of the country and his palace is the largest residence in the world. The monarchy is revered and respected. There are parties but no elections.
Posted by MadMonarchist at 12:19 AM