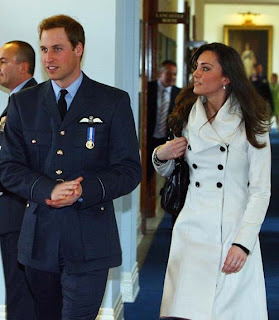 Even in the staunchly republican United States every morning news show has gleefully reported the big news from Great Britain: HRH Prince William is officially engaged to marry longtime girlfriend Kate Middleton in London next year. Palace officials stated that Prince William proposed to Kate while on vacation in Kenya in October but informed only the Royal Family and of course Kate's family with whom the Prince is very close. The Prince also kept to tradition by asking Kate's father for his permission to marry his daughter. Prince William presented his beloved with his late mother Diana's engagement ring, in an effort, he said, to include her in this grand occasion. So far no further details have been released as to exact date and location but those answers have been promised to come "in due course". The Mad Monarchist joins all the loyal subjects of Great Britain and the Commonwealth realms in sending heartfelt congratulations to the young couple, the future King and Queen of Great Britain and Northern Ireland etc on the occasion of this happy event. May Prince William and the soon-to-be Princess Catherine have a lifetime of happiness together. God Save the Queen!
Posted by MadMonarchist at 7:20 AM