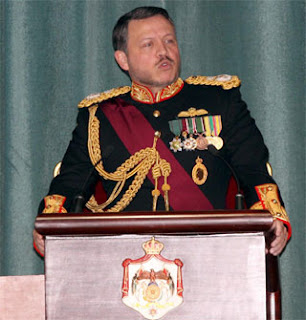 Name: The Hashemite Kingdom of Jordan
Reigning Monarch: His Majesty King Abdullah II
Reigning Family: Bani Hashem (Hashemite dynasty)
Status: The Jordanian royal house can trace their ancestry all the way back to the Prophet Mohammed. Modern day Jordan originated in the Emirate of Transjordan in 1921 following the partition of what had been the Ottoman Empire after World War I. A British protectorate, greater independence was granted in 1923 with full independence coming after World War II. In 1949 the Emirate of Transjordan became the Hashemite Kingdom of Jordan. Jordan is a constitutional monarchy but one in which the king holds considerable power. There is representative democracy in Jordan and certain rights reserved to the houses of deputies and notables, however, the King appoints all judges, all local governors and his approval is required for legal amendments. The royal veto can be overridden by a two-thirds vote of both houses of the National Assembly. He appoints the prime minister and on his recommendation other government ministers. Political parties were only allowed in 1992 and for the most part, prior to that time, the King ruled as he saw fit (that being King Hussein, a quite beloved figure in Jordan). In 1997 Islamic fundamentalist groups boycotted elections because of the policies of the Jordanian government, generally viewed as the most moderate and tolerant in the region.
Posted by MadMonarchist at 12:13 AM