A Request to Readers 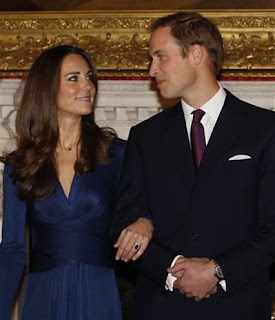 Yesterday on the radio listeners across central and south Texas as well as internet listeners around the world on a certain station heard a tirade against Prince William and Kate Middleton as well as the House of Windsor in general from a certain right-wing bomb thrower. He spent the first segment of his show talking about how stupid it was to talk about William & Kate as most news did the previous morning. That would be absurd enough but he then had to go on a tirade about how all the royals are cousins (William and Kate in his head too) and heaping insults on all the royals, calling them inbred morons, calling Prince Harry a "butt-face" and saying that Kate and William were going to have ugly children and on and on and on. I fired off an email to complain about his rude behavior toward one of America's closest allies and he seemed shocked that anyone would actually be offended by his insults.

I hate to do this but I would like to ask all readers to do the same. I'm sure not everyone will but if just half of the people who read this blog would take a minute to email their displeasure at such insulting behavior it would be significant. I did not, and I would advise others not to expound on the benefits of monarchism -that would be a waste of time in this case and I do not wish to "give that which is holy unto the dogs" but I would really like it if as many of you who read this (I would think readers from the UK, Canada and Australia would be especially motivated) would let your feelings be known that such rude and un-called for insults toward a happy young couple I think it would definitely have an impact and let this guy know that his brand of "humor" is not funny, not appreciated and is offensive to many, many people. I'm sure not everyone will do this (though I would love it if all would) but I make the request because even if only half of the people who follow and read this blog every day would take a minute to send an email it would be a blow against this kind of offensive behavior.

So, if you would like to do something to defend the British monarchy and the future King and Queen of the U.K. and Commonwealth realms send your email to joepags@woai.com
Thank You.
The (very) Mad Monarchist
Posted by MadMonarchist at 12:24 AM