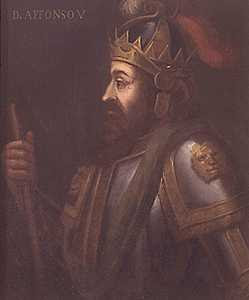 Prince Afonso of Portugal was born in Sintra on January 15, 1432, the son and heir of King Edward of Portugal and his consort Eleanor of Aragon. He did not have much of a childhood, being only six years old in 1438 when he was called upon to succeed his father as King Afonso V of Portugal and the Algarves. Who might have guessed at that time that the young boy would become one of the most famous warrior kings in Portuguese history. During his minority Afonso had been acted for by, first, his mother and then his uncle Infante Pedro, Duke of Coimbra but the favorite of the King was the first Duke of Braganza, the most powerful noble in the country and one of the most wealthy men in all of Europe. Once he took up his powers as King in 1448, Afonso V nullified the laws passed during the regency and this, along with some accusations taken as fact, led to Pedro of Coimbra being declared a traitor. At the battle of Alfarrobeira north of Lisbon Pedro and his forces were defeated by King Afonso V, the duke himself being killed in the fighting. It was an ugly episode, especially considering that in 1447 Pedro had given King Afonso V his daughter Isabella as his first wife (she died in 1455, possibly from poisoning).

That bit of unpleasantness done, King Afonso V turned his attention to the traditional enemy of Portugal; the Moors of North Africa. Ceuta (today a Spanish enclave) on the north African coast had been seized by previously by King João I and this provided a foothold for further campaigns by Afonso V. With the blessing of Pope Nicholas V the King set out and captured Alcácer Ceguer (today Ksar-el-Kebir) in what is now Morocco in 1458. The city would remain in Portuguese hands for the next forty-two years. Turning back north with his army Afonso V captured Tangiers in 1460 though that city proved very difficult to hold and for about four years Tangiers changed hands as the Moors recaptured it only to have Afonso capture it yet again before Portuguese control was firmly secured. In 1471 the King captured Arzila, securing Portuguese rule over northern Morocco. This string of hard-won victories earned Afonso V his lasting nickname “Afonso the African”. It was also during this time that ‘Prince Henry the Navigator’ was making important contributions toward the exploration of the Atlantic. Afonso V supported these efforts, further exploration of the African coast being a potential way of outflanking his enemies, but he pursued the issue no further on his own after the death of Prince Henry in 1460.

In 1475 Afonso V married again, without papal recognition, to Juana of Castile in an effort to take advantage of internal problems in the Kingdom of Castile. Juana was the only child of King Henrique IV but her legitimacy was considered questionable. Because of this, the half-aunt of Juana, the future Isabella the Catholic, was recognized as heir to the throne. However, after his marriage to Juana, King Afonso V claimed the throne of Castile on behalf of his wife when Henrique IV died. This was also a matter of protecting the honor of the Portuguese Royal Family as Afonso was Juana’s uncle (her mother being his sister) and so accusations that she was illegitimate cast her mother, Queen Juana of Portugal, Afonso’s sister, in a very negative light. King Afonso invaded Castile to enforce this claim but he was defeated at the battle of Toro in 1476 by King Fernando II of Aragon, husband of Isabella of Castile. The Portuguese forces were scattered and forced to surrender. King Afonso returned to Portugal and his wife went into retirement in a convent.

After so much previous success on the battlefield the lost war with Castile was a severe blow to the morale of Afonso V, a situation made worse after a failed effort to enlist the assistance of King Louis XI of France. In 1477 Afonso V abdicated in favor of his son, João II, and retired to a monastery in Sintra where he passed his final years in religious seclusion until his death in 1481. His campaigns had gained great glory for the Kingdom of Portugal, though they had been costly. His son would carry on his work, revitalize the country and lead the Portuguese to further victories and expansion through exploration.
Posted by MadMonarchist at 12:16 AM