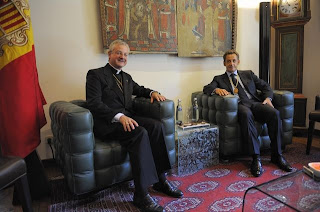 Name: The Principality of Andorra
Reigning Monarch: Co-Prince Joan-Enric Vives i Sicilia, Bishop of Urgell and Co-Prince Francois Hollande, President of the French Republic
Reigning Family: None
Status: Perhaps the most unique of the remaining monarchies of the world the Principality of Andorra, long ruled jointly by the Kings of France and the Bishops of Urgell in Spain, has a history stretching back to the 9th Century. Tradition says that their first charter was granted to them by the Emperor Charlemagne with the land being ruled by the Count of Urgell. Centuries later the descendants of the count gave the lands to the Catholic diocese of Urgell but the Bishops had to make alliance with more powerful feudal lords to defend Andorra; first the Caboet then the House of Foix until the system was formally established for a co-principality held jointly by the Bishop of Urgell and the Count of Foix. The Foix claim passed to the viscounts of Béarn and then to the French royal house of Bourbon under King Henri IV. Since 1607 the King of France (and later the Presidents of the French Republic) and the Bishops of Urgell have been co-Princes of Andorra. It was not until 1993 that Andorra adopted its first written constitution in order to join the European Union. The government is a parliamentary democracy, the Prime Minister is head of government and the positions of the co-Princes of Andorra are effectively honorary ones with executive power resting in the Prime Minister. Neither co-prince lives in the country and their ceremonial duties are carried out by local representatives.
Posted by MadMonarchist at 12:19 AM