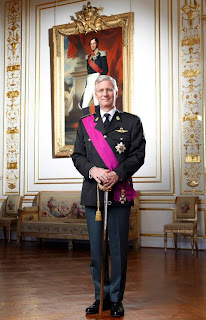 Name: The Kingdom of Belgium
Reigning Monarch: His Majesty Philippe, King of the Belgians
Reigning Family: House of Saxe-Coburg-Gotha
Status: Belgium is a constitutional monarchy based on the idea of ‘popular monarchy’ that was fashionable at the time of its foundation. The power of the monarch has always been very limited but the early kings played a very active role in government, especially foreign policy and succeeded in making sure Belgium not only survived but prospered and even joined the club of colonial powers. The role of the monarch became more important when Belgium was officially divided between Dutch-speaking Flanders and Francophone Wallonia. As a result of this the king has been forced to play a greater role as mediator between the two factions in the formation of governments. It also placed a greater importance on the role of the king as the guardian of the unity and independence of the country. Royal assent is required for bills to become law but on the one occasion this was tested the result was the king was removed for a day and the law passed without him, effectively rendering the requirement for royal assent purely symbolic as in many other countries. Unlike every other monarchy in Europe the King of the Belgians does not legally become king immediately upon the death of his predecessor but only officially upon taking the constitutional oath (though he is referred to as king beforehand).
Posted by MadMonarchist at 12:13 AM