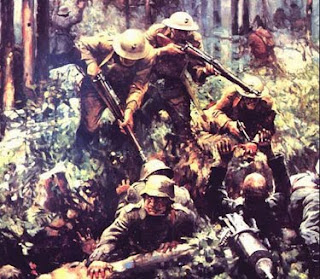 Today it is Veterans Day in America, an occasion to honor all those who have served in uniform on the far flung battlefields where duty called them. In the old days it was known as Armistice Day to commemorate the end of hostilities on the western front in World War I. That is a day I have mixed feelings about to say the least. Of course there was every reason for celebration, particularly by the victorious allied nations, but for all parties in that the slaughter had finally stopped. However, at what cost? The loss of millions of lives, the loss of the Romanov, Hapsburg and Hohenzollern monarchies as well as the fatal weakening of several others whether they knew it at the time or not. It is also hard to be too celebratory about the peace considering how short-lived it was. The post-war peace haggled out at Versailles was a far cry from the (much more successful) Congress of Vienna. If anything it only proves what sort of "peace" the world can expect when all the agreements are made a vindictive Frenchman, a socialist Welshman and a preachy American professor. Instead of peace Europe got a ceasefire for a couple of decades and to say that at least the slaughter was over requires turning away from the fact that an even greater and more inhuman slaughter was to follow it. However, as "Veterans Day" we can at least give all due credit to the brave and long-suffering soldiers who shed their blood across Europe, Africa, Asia and the oceans in that war and in all those since, none of which were of their making but which they fought with a courage and tenacity to do pride to all of their nations.
Posted by MadMonarchist at 3:51 AM