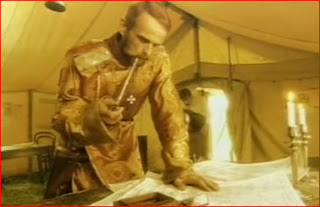 In light of the recent events at Ft Hood, I thought the time as good as any other to discuss "radical" Islam. First of all, my own experiences prompt me to dismiss any effort by some to judge by the group when it comes to Muslims. I was once on a tour with a group of Muslim families who were obviously western converts and they were the most ill-mannered, ill-behaved, flat out rude bunch of people I've ever had to endure. Yet, while I was at university I had several classes with an African Muslim from Benin and he was the most polite, friendly, hard working student I ever met while I was there. He earned my sincere respect and was often the only other person besides myself to speak up in defense of traditional morals and values. So, to judge by the group is simply absurd.

Those Muslims who have carried out terrorist attacks are certainly enemies of civilization, both in terms of their goals and in terms of how they pursue them, launching cowardly surprise attacks on innocent people. These are the same people who are not only the enemies of my people and my own religion but also my politics; they are the same stripe as those who destroyed the monarchies of Iran, Iraq, Egypt, Libya in terms of their political enemies if nothing else and wish to do the same to virtually all others even so staunchly Islamic a monarchy as Saudi Arabia. It would be totally wrong though to paint all Muslims with the same brush. In fact, there are ways in which I think the Christian world could take some lessons from the devout Muslims who are not terrorist fanatics. I remember an interview with His Highness the Aga Khan in which he spoke of Muslims being different from "most" Christians in that Muslims cannot seperate their religion from how they live their lives as it touches every aspect of their lives. That should be the same attitude for Christians as well and yet so many regard their faith as little more than a flag, a form of identification; something they 'are' but which has no bearing on how they live their lives.

I can also, to some extent, understand Muslim outrage at "western culture" as much of it today outrages me as well. One item I will never forget is hearing on the news, in the aftermath of the U.S. and coalition victory of the previous regime in Iraq, that for the first time in Iraqi history the "Playboy" channel was available on Iraqi TV. I can fully understand a devout Iraqi Muslim being quite outraged at the introduction of that smut which so many in the west hold up as an example of "freedom of speech". Like most religious people Muslims share many if not most of the same core traditional values as Christians. However, that understanding does not equal sympathy with how every individual chooses to deal with confronting such threats. I am also certainly not in the same camp as the multi-culturalists. I am all for learning about other cultures, appreciating them and so on, in fact I pride myself in being able to find something admirable in every people around the world. However, what is pushed for by those shouting for multiculturalism today is actually the destruction of these cultures; mixing them all together until all lose their value and all fall prey to the dull, mechanical, Bolshevik mono-culture of the liberal, elite "one world" types.

That is another reason why my zeal to defeat the current crop of terrorists does not cause me to paint all Muslims with the same brush. Most Muslims are not terrorists and I do not regard most Muslims as a threat to my religion. The greater threat is the enemy of all religions; the Bolshevik, secularist, atheist, agnostic liberal elites who look upon all relgions as hinderances to their one-world, socialist utopia. I have never seen Muslims protesting Christian symbols in my country but I see the secularists attacking them constantly. I remember a case of a Muslim in Italy protesting the presence of crucifixes on the walls of Italian classrooms but I think it telling that the person in question was a Scottish convert to Islam who had moved to Italy. For that, I have no sympathy at all -another reason why I am no multi-culturalist. If a Muslim is offended by Catholic icons he shouldn't move to the very country where the Pope lives! In the same way, someone who is offended by Buddha statues should probably not move to Thailand. If one is to move to a foreign country one must be prepared to accept the traditions of the majority and not expect them to change to please the foreign minority, though I realize that has been all the rage lately in many places.

I am a pan-monarchist and I do not want to see Muslim extremists marching in London heaping insult on the British Queen and culture. I would be very pleased to see Muslims restoring their own countries to greatness with the restoration of the great Muslim monarchies of the past. I also think the current problems reveal what a disaster it was for the west and the world as a whole when the monarchies of Iran, Afghanistan, Iraq, Egypt and so on were destroyed. I would like to see more forceful work done toward their restoration though I am at least pleased that in Iraq and Afghanistan monarchist parties have been able to compete in the political process for the first time since their monarchies were destroyed. The world would be a better place in every way and a more peaceful place if these monarchies were restored to their former glory. I have my particular beliefs and opinions but I am also in favor of religion in general, in opposition to the liberal secularists and I am a pan-monarchist in favor of monarchy in general in opposition to leftist republican rule and, of course, I am ..... The Mad Monarchist.
Posted by MadMonarchist at 1:09 AM