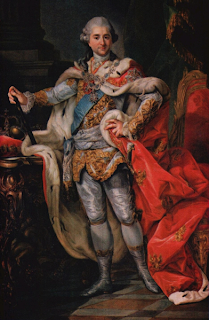 The last King of Poland and Grand Duke of Lithuania in the old Polish-Lithuanian Commonwealth was Stanislas II August. He was born Count Stanisław Antoni Poniatowski in 1732 in Belarus. Politics came naturally to him with his family connections and powerful oratory and he was a famous member of the Chamber of Deputies by the time he was 20. In 1755 he went to work for the British ambassador in St Petersburg. The future Empress Catherine the Great was hopelessly smitten by him and he made enough of an impression on the Empress Elizabeth that she made him the Russian ambassador to the King of Saxony. When King Augustus III died in 1763 Poland fell into the usual squabbles over who would succeed him and following a coup and the intervention of Russia the young Count Poniatowski was elected King of Poland and Grand Duke of Lithuania, taking the name Stanislaw II Augustus. He was crowned in Warsaw on November 25, 1764.

As King of Poland he instituted several reforms but when rebel forces rose up against him and even took him prisoner for a time. They declared him deposed but Russian imperial troops came to the rescue and restored Stanislas to his throne. However, the Kingdom of Poland had effectively become a Russian protectorate. When the first partition of Poland was enacted in 1772 there was nothing he could do about it and his position only became further dependent on Russia as the radical revolutionary ideas breaking out in France began to spread across the nations of Europe, infecting Poland as well. In 1783 he married his longtime mistress by whom he already had a son. He attempted to strengthen his position as monarch by embracing the call for reform and encouraging a healthy sort of Polish nationalism. This culminated in the enactment of the Constitution of 1791.

However, although the people were deeply moved by the King's embrace of the new constitution a great many nobles were against it and declared against the monarch in their effort to see it abolished. Warfare erupted between the confederation of nobles backed up by the Russians on one side and the King and those Poles loyal to the constitution on the other. The King's troops performed bravely with some excellent hard-fighting generals (including Tadeusz Kosciuszko who had fought in the Continental Army in the American War for Independence) but in the end King Stanislas, on the advice of all of his ministers, finally gave in to the nobles and surrendered himself to the Russians. The result was the second partition of Poland between Russia and Prussia in 1793. Only two years later Austria joined in the last partition of Poland which finally divided up the last of the country between the three powers. Stanislas II August was forced to abdicate on November 25, 1795. He was then taken to St Petersburg where he lived out the rest of his life on a pension granted by the Empress. He died lonely and deeply in debt in 1798 and was buried in St Catherine's Catholic Church in St Petersburg.

Some look with sympathy on the last King of Poland and point to the many undeniably great contributions he made to Polish society throughout his reign in the arts and education and so on. Yet others see him as a monarch who danced too close to dangerous forces, who did little to encourage the support of traditional supporters like the Church and who was too weak to set a course and stick to it. Some view his final capitulation to the confederation of nobles as downright treasonous and yet given all that came after it, many could also not help to look back on the Poland he represented as a better time when the country was at least nominally independent and at least existed. In 1938 his remains were moved to his birthplace in Belarus and in 1995 finally to Warsaw where he now rests in St John's Cathedral.
Posted by MadMonarchist at 12:43 AM