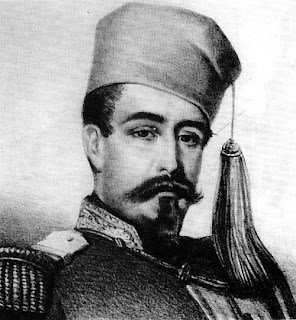 The name of General Christophe Leon Louis Juchault de Lamorciere may not be an extremely well known one, but in his own time he was one of the most famous and prominent religious monarchists in Europe. He was born in Nantes in 1806 and, coming from a military family, he entered the army as a young man, becoming a lieutenant of engineers and being posted to Algeria where he earned a great reputation for his skill, personal bravery and a polite and friendly attitude that won him many friends among the native Arabs. He was so popular and respected that, almost alone among French officers, he could travel freely through native areas with no weapons at all. In 1835 he was promoted to lieutenant colonel of zouaves and won steady promotion thereafter for his heroism in battle. In 1843 he was made a lieutenant general and a few years later was even appointed temporary governer of Algeria. After winning another spectacular victory in 1847 Algeria was pacified and, considering his work done, he retired from the army.

Lamoriciere was very much known for his royalist opinions as he dabbled in French politics and as such he was very much opposed to the presidency of Louis Napoleon Bonaparte. When Louis became Emperor Napoleon III he had Lamorciere arrested and later exiled for 9 years, going to England and Germany before settling down in Belgium. He befriended Charles de Montalembert and this fired his religious devotion which was to remain with him forever after. When the Papal States came under threat from liberal forces in Italy the Blessed Pope Pius IX appointed the Belgian prelate Msgr. Xavier de Merode Minister of War and charged him with finding someone to lead the Papal army in the coming crisis; a crisis that would determine whether the Pope would remain a temporal monarch as well as a spiritual leader or if he would become a prisoner of the united Italy. The very Catholic and very monarchist Lamoriciere was an obvious choice, also being Merode's cousin.

For General Lamoriciere to even accept the post was an act of considerably courage and selflessness. The odds arrayed against the Papal States were so huge nothing short of a miracle could save them and given his illustrious military reputation many generals would not have wanted to accept a command that was doomed to failure. However, Lamoriciere accepted the job and did the best he could with the small budget and small army of international volunteers he had to work with. In a throw-back to his days in North Africa he even outfitted the papal troops in zouave uniforms and the high command of the Papal army looked very much like that of a French legitimist royalist movement. Lamoriciere worked feverishly but before a year was up it was clear that the liberal nationalists would overwhelm his tiny army. Nonetheless, he put up a brave and skillful fight, if for nothing else than to show the world that the Papal States were being conquered against their will.

With only 8,000 men he confronted 50,000 Italian liberals at Castelfidardo on September 18, 1860. It was a defeat, though a gallant one, for the Papal forces. Ancona surrendered soon after and, feeling that he had done his best and could do no more, resigned his command and returned to France, refusing all honors offered to him on the grounds that he had not achieved victory. At the pressing of the Pope, he did accept the honor of the Supreme Order of Christ; the highest papal order, for his service. He spent the rest of his life in religious study and charitable work; building a church at his own expense for a poor parish and founding a Catholic school and orphanage which he financially supported. His only son predeceased him and leaving only daughters his family name died with him on September 11, 1865. His is, nonetheless, remembered very well in certain circles for his military service to France and his command of the Papal army in the struggle against liberal revolutionaries in defense of the papal monarchy.
Posted by MadMonarchist at 12:34 AM