The Dominion of Canada is not often thought of as a major military power, but such is more the result of quintessential Canadian politeness rather than a lack of battlefield prowess. In fact, Canadian troops have fought gallantly and with exceptional ability on battlefields all over the world. It is a little known fact, for instance, that the first Canadian troops to organize for combat overseas were the volunteers to the Papal Zouaves who went to Italy to defend the monarchial position of Blessed Pope Pius IX (I'm sure the liberal republicans in Quebec are horrified about that). However, even in light of much distinguished service since, probably no other group of Canadians are as celebrated for their military accomplishments as the troops of the Canadian Expeditionary Force that served in World War I.

When the British Empire went to war against Germany in 1914 patriotic Canadians rushed to fight for King and Country. The CEF was an almost entirely volunteer force and the Canadians were to win many laurels on the western front and even above it as the highest scoring “ace” fighter pilot of all the English-speaking countries was the Canadian aviator Billy Bishop. The CEF primarily consisted of four infantry divisions, later organized as the Canadian Corps within British Imperial forces, though there was also a Canadian Cavalry brigade and a number of support units. Originally commanded by British generals, in 1917 the corps finally had a Canadian commander, the famous General Arthur W. Currie.

The Canadian forces fought with exceptional courage and tenacity as soon as they arrived. Coming from a country still largely considered a frontier nation the Canadians were tough, self-sufficient and born fighters and marksmen who knew how to adapt to difficult situations. Also, having grown up with the harsh ferocity of Canadian winters they also were better able than many others to tolerate the cold climate of the winter months in the mud of Flanders. They saw their first major action at the battle of Neuve Chapelle but it was at the second battle of Ypres that they first proved what great warriors they were. It was at second Ypres that the Germans made their first chemical warfare attack on the western front, releasing a cloud of poison chlorine gas against the Allied line. The Canadians proved their discipline and tenacity by standing firm while all the other Allies units around them broke and fled in the face of the new, terrifying weapon. They also displayed their ingenuity by coming up, on the spot, with the discovery that the gas could be neutralized by urinating on a handkerchief and placing it over the mouth and nose to breath through. Even when another attack was directed solely at them, the Canadians held their ground and fought off the Germans in spite of losing a third of their men.

The Canadians fought with great courage again in the Somme offensive, taking very heavy losses but followed it up with probably their finest hour at the attack on Vimy Ridge where, for the first time, all of the Canadian divisions fought together as a whole. Four Canadians earned the Victoria Cross during the assault, mauling the German 6th Army and securing the ridge for the duration of the war; the Germans never even attempting to take it back. The Germans themselves were so impressed that they categorized the Canadians as shock troops, the name they gave to their most elite assault units. Later on the Canadians won further glory at the Second Battle of Passchendaele and numerous other actions in the final stages of the war. Their commander, General Currie, who emphasized the need for training, battle-specific training and keeping soldiers informed as to their goals, was, by the end of the war, so widely respected for his ability that the British Prime Minister later said that if the war had continued into 1919 he would have made the Canadian general the top commander of all British Imperial forces.

With the anniversary of the end of World War I recently behind us, it is worth remembering the exceptional abilities and the patriotic spirit of the Canadian Expeditionary Force whose members fought so hard, so faithfully and so well in the service of their monarch, King George V. 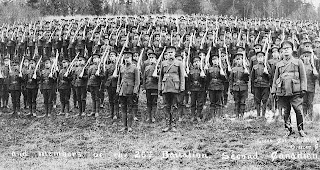