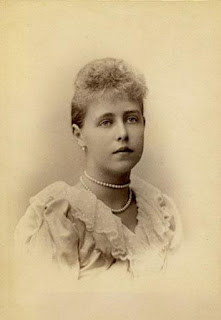 Amongst all the royal consorts of the Kingdom of Romania probably none stand out quite so much as Marie of Edinburgh, wife of King Ferdinand. She was born Marie Alexandra Victoria on October 29, 1875 in Kent to Prince Alfred, Duke of Edinburgh (son of Queen Victoria of Great Britain) and Grand Duchess Maria Alexandrovna of Russia (daughter of Czar Alexander II). As her father was a serving officer in the Royal Navy she spent a great deal of her childhood overseas, much of the time on the strategic island of Malta. She also started turning heads quite early on and no less than the future King George V was so in love with her as to propose marriage. The British relations had no problem keeping it all in the family as it were, but Marie’s very Russian mother would have none of it, not being a very big fan of the British who, even in Victorian times, were considered scandalously liberal by the standards of Romanov Russia.

Instead, in 1893 at the age of 17 Princess Marie married Crown Prince Ferdinand of Romania, son and heir to King Carol I of the House of Hohenzollern in Germany. This was probably to the liking of the Russians who were eager to keep Romania within their own sphere of influence despite having a German family on the throne. However, seemingly from the very start, the marriage of Marie and Ferdinand was an utter disaster. Marie disliked her husband from the start and over time grew to absolutely loath the man. So, it was not really surprising that Marie began having a series of affairs and at least 3 of her 6 children are generally held to have been fathered by man other than Ferdinand, though thankfully the 3 oldest (including the heir to the throne) was certainly his own.

While Crown Princess, Marie had an affair with an army lieutenant which was stopped by an outraged King Carol. Marie became pregnant during that time but the child disappeared, whether because of being stillborn or given up for adoption no one will ever know. In 1899 while Marie was pregnant with the future Mignon, Queen of Yugoslavia, she told her father-in-law that the girl was the daughter of a Russian Grand Duke though her husband later accepted the child as his own. He did the same for Prince Nicholas when he was born despite rumors that his real father was Waldorf Astor. However, Marie came into her own when her husband became King of Romania in 1914 and, despite the family ties with Germany, the very pro-British Queen consort led the campaign within the palace for Romania to enter the war on the Allied side in return for territorial expansion at the expense of Hungary.

Queen Marie helped stir up public support for the war, opposition to Germany and solidarity with the Allies. She also volunteered as a nurse for the Red Cross. However, Romania did not do well on the battlefield and the country was soon overrun by a combined Austro-German offensive. Kaiser Wilhelm II was particularly bitter that his Hohenzollern cousins would declare war on him. In the end though, Romania emerged on the winning side and Queen Marie went to Paris to lobby for Romania to get all of the additional territory she demanded from the Allied leaders re-drawing the map of Europe at Versailles. As a result the Kingdom of Romania almost doubled in size. However, domestic problems continued to plague the still popular queen.

Marie and her son, the future King Carol II, initially were very close but soon drifted apart as both interfered in the romantic lives of the other and in time they became completely estranged. In 1927 King Ferdinand died and Queen Marie, ignored by her son, devoted her time to writing books and to her religion. Originally Church of England, she incorporated some Eastern Orthodox elements to please the Romanian people but later embraced the Baha’i religion, a rather obscure sect which had originally grown out of Shia Islam. Queen Marie later said that she found in her new religion what she believed was the true spirit of God all other faiths sought but lacked. She died on July 18, 1938 and was buried next to her husband leaving behind a one of the most controversial and colorful lives of any modern royal consort.
Posted by MadMonarchist at 12:42 AM