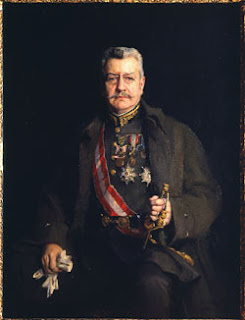 Although often overlooked, the Monegasque Princely Family has a long history of military service and none of the recent sovereigns of Monaco have had such an illustrious military career as HSH Prince Louis II. As Hereditary Prince of Monaco during World War I he was among the other heirs-to-the-throne such as HRH Edward Prince of Wales and HRH Leopold Duke of Brabant who served in the Allied armies on the western front. Louis II took an interest in all things military early in life and following the proud tradition of his ancestors enrolled at Saint-Cyr College for French army cadets as a foreigner. After graduation he served with the 2nd Africa Light Cavalry after a training session at the Saumur Cavalry College. He then rejoined his regiment in Constantine. He served for 10 years and was awarded the cross of the Legion of Honor before leaving the army to prepare for his future role as Sovereign Prince of Monaco.

However, when World War I erupted Louis did not hesitate to rush to re-enlist in the French army and his father could hardly protest. With the rank of captain of cavalry he was first posted to the 5th Army commanded by General Louis Francet d'Esperey. Only a week after his arrival he was sent to the Marne, seeing some of the most fierce and bloody fights of the war. Later he served as a liason officer and with the artillery and saw action against the Germans in the exposed sectors of La Pompelle, Sillery and Berry au Bac. He fought in numerous battles and his superiors had nothing but praise for Prince Louis who displayed great courage and a tremendous devotion to duty. During a fierce German attack he rescued several comrades while under heavy enemy fire and was awarded the War Cross with Palm Branch for his bravery. In uniform, facing the enemy he was in his element and won numerous decorations and promotions. He was elevated to brigadier-general and later major-general and awarded the Grand Cross of the Legion of Honor. He was also later awarded the highest distinction given to officers in the field; the Military Medal.

One of his most emotional (at least by his standards) letters home was telling his father Albert I of inspecting the damage done by the Germans to the family estate at Marchais, much of which was destroyed in the fighting or looted or burned deliberately. Louis had many childhood memories of the place and the destruction there was particularly painful to him but only added to his determination to see the war through to a successful conclusion. Once that day came in 1918 Louis chose to stay on with the French army as a liason officer at Metz. In fact, were he free to choose he probably would have rather remained a general than become Sovereign Prince of Monaco but that could never be. Nonetheless, Louis II was justly proud of his distinguished service and kept a portrait of himself in his uniform and medals in each of his offices. He also began the impression collection of Napoleonic memrobilia, enlarged by his grandson and successor, now on display at the Princely Palace Museum.

Louis II became Sovereign Prince of Monaco in 1922 and reigned until 1949 when he was succeeded by his grandson HSH Prince Rainier III.
Posted by MadMonarchist at 12:35 AM