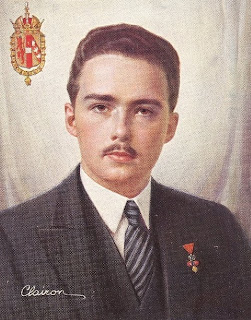 His Imperial Royal Highness Archduke Otto of Austria turns 97-years-old today. Born in 1912 to the Blessed Emperor Charles and Empress Zita of Austria-Hungary he became head of the venerable House of Hapsburg-Lorraine in 1922. He held that post and was the legitimate if unrecognized Emperor of Austria and King of Hungary from that time until 2007 when he abdicated (so to speak) his position to his son. During certain periods he had some hopes that he might see a Hapsburg restoration. Austrian Chancellor Engelbert Dollfuss was said to be discussing such a move but he was soon murdered by the Nazis. Archduke Otto was an open and avowed enemy of the National Socialist regime and Hitler wanted him dead. When the Nazi regime collapsed the Archduke hoped again that perhaps the time for a restoration had come but the dominance of the Soviet Union prevented this. In the decades since he became known as a European politician, standing out for his defense of traditional values, even arguments for monarchy at times and also his calls for European unity. I tend to get a chill up my spine whenever that subject is mentioned these days but I'm sure European unity would look entirely different if done according to the Archduke's principles rather than the Eurocrats at the EU. Perhaps his most famous media moment came when the slight, wiry Austrian royal punched out the Northern Ireland politician Ian Paisley when he began shouting insults at Pope John Paul II when His Holiness was addressing the European Parliament. Whether crowned or not the head of the House of Hapsburg seemed to take seriously his duty to protect the Church! His Imperial Royal Highness has been, over the years, a very admirable figure and standard bearer for the House of Hapsburg. He retains a great reputation and commands the respect of many who would not call themselves his ideological allies. The Mad Monarchist send best wishes and congratulations to His Imperial Royal Highness on his 97th birthday and hopes that God grants him many more years to come. Gott Erhalte Unser Kaiser!
Posted by MadMonarchist at 2:46 PM