The Legend of Maximilian's Gold 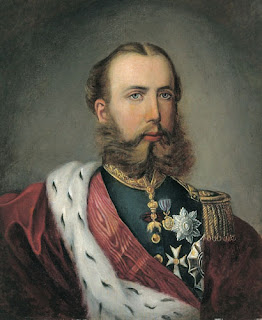 By 1867 the Mexican Empire was in its death throes but the core of committed loyalists around Emperor Ferdinand Joseph Maximilian refused to accept defeat. The Empress Carlota had gone to Europe to try to rally international assistance and Maximilian tried to ensure that the treasury did not fall into rebel hands and could be used to continue to fund the imperial cause. The Emperor chose four Austrian officers and between fifteen and twenty Mexican loyalists who he could trust to load fifteen wagons with an estimated $10 million in gold, silver and jewels.

It was considered too risky to try to take the treasury across Mexico to a Mexican port since so much of the countryside was infested with rebel bandits. Instead, it was decided to get the treasure out of Mexico to neutral territory as soon as possible and then load it on a ship where it could be taken to a safe place. The Austrians and Mexicans headed for the port of Galveston, Texas. After making it safely through the wilds of northern Mexico on an erratic course to throw off any pursuit the party crossed the Rio Grande into Texas and camped at Presidio del Norte. There they met six former Confederate soldiers from Missouri.

At the end of the American Civil War many Confederates had gone to Mexico rather than surrender to Yankee rule. Many had even fought in the Mexican Imperial Army. Because of these close political ties and sympathies the Austrians, Mexicans and Missourians soon became good friends. The Austrian officers did not reveal the truth about their cargo, but they did ask the Confederates to ride as escort with them to Indianola to guard against bandits or Indian attacks. As it turned out, the Austrians were right to be suspicious as poverty and the chance of fabulous wealth can easily overpower subtle wartime alliances.

At the border of Crane and Upton Counties, near where route 385 is today, at Castle Gap the Missourians discovered the truth about what was in those fifteen wagons belonging to the Emperor of Mexico that they had been escorting. Immediately overpowered by temptation the Missourians shot and killed all of the Austrian officers and their Mexican drivers. The six former Confederates buried the treasure there at Castle Gap, taking only as much gold as they could carry on their persons to pay their way until they could return for the rest of it. They ran off the animals and burned the wagons over the spot they had buried the treasure and then rode off toward San Antonio. However, the strange story of the Emperor’s treasure was far from over.

As the six soldiers turned bandits rode back to civilization one of them fell ill at Fort Concho. With all that loot waiting behind them and the gold they had on them burning holes in their pockets the other five Missourians were in no mood to wait on a sick man and left the comrade behind as they rode on. However, the fear of being cut out of his share of the treasure was powerful medicine and before the sick man had fully recovered he got back on his horse and set out after his comrades. To his shock he found them sooner than he expected; not far down the road he discovered their bodies at the spot where they had been attacked by Indians and killed to the last man. This meant that this one sickly Confederate was then the only man alive who knew the location of the lost treasure of Emperor Maximilian.

However, this man suddenly decided that he had had enough of the wild west and as he could not possible take all the treasure out by himself he gave up on Texas and headed for home in Missouri. The fact that he was still very ill also influenced his decision. Yet, bad luck seemed to plague the old soldier. He fell in with a group of men who, unbeknown to him, were horse thieves wanted by the law. One night the law caught up with them when a posse from Denton captured them and took them to jail; including the Missouri Confederate whom they assumed was just another member of the gang of horse thieves. The doctor at Denton informed the fading soldier that he had contracted a disease and would soon die.

This Denton doctor had been very good to the dying Missourian and so, with no hope of ever claiming the treasure himself, he told the doctor the tale about he and his buddies discovering the gold and jewels, killing the Austrians and Mexicans and hiding it at Castle Gap. He told him how his partners had been killed by Indians and drew a crude map for the doctor and tried as best he could to describe the area where they had buried the treasure so the doctor who comforted him in his final days could find it. The Missourian died and a few months later in 1868 the doctor from Denton organized a group of men and rode off toward Castle Gap to find the treasure of the Mexican Emperor.

The doctor and his men rode all over the Crane and Upton County line at Castle Gap but to their great disappointment could never find any trace of the buried treasure. Tales and legends of the buried gold of Emperor Maximilian are still told across Texas to this day. Many people have searched for the secret cache and there are several versions of the story about what exactly happened. Some believe that Maximilian never had such riches himself at the end of his reign and that the entire story is a fabrication (probably the most realistic point of view). Others, however, believe that the gold was found by someone else who knew how to keep a secret while still others believe that the lost treasure of Emperor Maximilian is still buried in Texas today waiting for someone to find it and confirm the legend to be true.
Posted by MadMonarchist at 6:07 AM