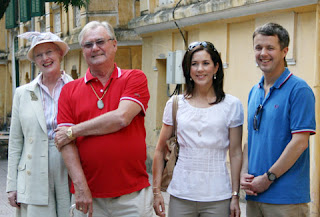 Today is the official start of state visit of HM Queen Margrethe II of Denmark to the Socialist Republic of Vietnam, but the royal family was out and about seeing the sights yesterday. TRH Crown Prince Frederick and Crown Princess Mary were also on hand but it was HRH Prince Henrik who took center stage as they toured around the capital city of Hanoi. Although born in France, Prince Henrik spent his earliest years in Hanoi, then part of French Indochina. His excitement was evident as he showed his son the house he grew up in and the streets where he played as a child. The Prince's family was involved in a number of businesses in Vietnam and after going to school in France Prince Henrik returned to Vietnam in 1950 to continue his studies at the French secondary school in Hanoi, despite the fact that conditions were not exactly ideal in Vietnam at the time. He remained until 1952 when he returned to France to attend the Sorbonne. Obviously, with the withdrawl of the French and the communist takeover the family did not return after that.

Prince Henrik was able, with his son, to place a plaque commemorating his father at St Joseph's Cathedral (his father's body went missing after the communist takeover, probably because he had been part of the colonial government). His family had been in Indochina since 1928 (the 3rd year of the reign of Emperor Bao Dai). It might be interesting to note that his childhood home is located on what is now Phan Dinh Phung street, named after one of the most famous and ardently monarchist anti-French fighters of the colonial period. The Danish royals will continue their visit in Vietnam until November 6.
Posted by MadMonarchist at 1:07 AM