Ex-President Carter has "No Regrets" 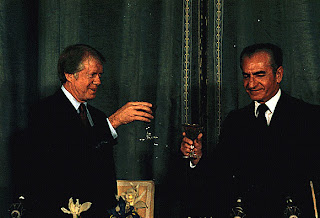 Proving that there is no fool like an old fool former Democrat President Jimmy Carter has recently stated that he has "no regrets" about his handling of the Iranian hostage crisis of 1979, which he blindly considers the only real downside to his four years in office. I guess he is overlooking such trivial things as the fuel crisis, the economic recession and the "malaise" as it was termed, but that might not be surprising considering that the former peanut farmer went on television and basically blamed all problems on the American people. And he wasn't reelected -what a surprise! The truth is that if Jimmy Carter had any sense in that peanut-sized brain of his, he would have a great many regrets, not only for doing almost nothing to secure the release of the hostages but for allowing the situation in Iran to deteriorate to such a point that the Ayatollah and his gang of terrorists were able to take power in the first place.

Few other presidencies in recent American history have been such monumental examples of stupidity as that of Jimmy Carter and the way he handled or rather mis-handled Iran tops the list. It was Carter who appointed George Ball to the Trilateral Commission in 1978 who did all he could to suppress support for the Shah and the Iranian monarchy. His head of the National Security Council also supported a halt to all support going to the Shah and worked with elements in the CIA to shift support to the Ayatollah who was preparing his bid to take power. Carter then did nothing as revolution erupted and brought down the ancient Iranian monarchy, allowing for the first time in modern history for terrorists to take control of an entire nation which they then used as their base to support their compatriots abroad. Even when it came to providing basic humanitarian medical treatment for the ailing exiled Shah President Carter had to be cajoled and brow-beaten into allowing the monarch to be taken to the Mayo Clinic for treatment.

The man who was to succeed Carter as President, Republican Party leader Ronald Reagan, said later that “I did criticize the President because of his undermining of our stalwart ally, the Shah, I do not believe that he was that far out of line with his people.” There would have been no hostage crisis to bungle if Carter had supported the Shah rather than undermining and abandoning him. There would have been no terrorist takeover, no Iranian support for terrorists in the near east and no nuclear arms crisis such as we are now facing if President Carter had not completely sold out the monarchy of the Shah who was a man of peace, a friend and ally to the west and a man who recognized the State of Israel and worked for peace in the Middle East. President Carter, you have plenty that you should regret and plenty for which you will ultimately have to answer for.
Posted by MadMonarchist at 12:20 AM