Anniversary of the Dalai Lama of Tibet 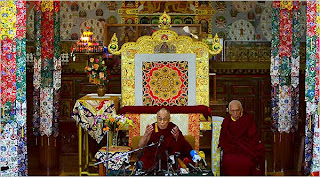 It was on this day in 1950 that Tenzin Gyatso, His Holiness the XIV Dalai Lama was enthroned as the temporal as well as spiritual ruler of the Himalayan Kingdom of Tibet. He was 15-years-old at the time, having been recognized as the reincarnation of the XIII Dalai Lama since 1939. Under normal circumstances his regent would have held power for a longer period of time but due to the increasing pressure and aggression from China the people of Tibet petitioned for the Dalai Lama to be declared of age sooner and assume his powers as temporal monarch. They had faith that his spiritual leadership would save them from the crisis they faced. Ultimately, however, Tibetan religion fell prey to the Chinese "People's Liberation Army" and in 1959 the Dalai Lama left Tibet to go into exile in India in the aftermath of a popular uprising that was bloodily suppressed by the communists. He has remained in exile ever since, however, the last "god-king" of Tibet officially ascended his throne 59 years ago today. The Mad Monarchist sends the Dalai Lama best wishes on this occasion and best wishes for all the Tibetans loyal to his government-in-exile and hopes that Tibet's legitimate monarch will one day be restored to his proper place in the Potala Palace.
Posted by MadMonarchist at 3:22 AM