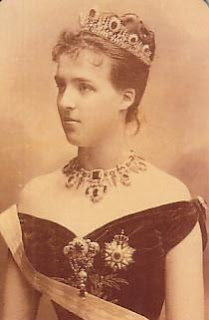 Amélie of Orléans was the last Queen consort of Portugal. She was born on September 28, 1865 to Philippe, Comte de Paris (nominally King Louis-Philippe II to his supporters) and Princess Marie Isabelle of Orléans. On May 22, 1886 she married HRH Prince Carlos of Portugal who had earlier intended to marry a Prussian princess but could not because of their refusal to convert to Catholicism. As for Princess Amélie, her parents had tried to marry her to a member of the Spanish royal family or the imperial family of Austria. However, Amélie and Carlos settled down to a happy marriage together, in spite of the match being more or less arranged, they were a compatible couple. When later on many rumors of affairs spread about her husband Amélie bore it with great dignity. One year after their marriage Amélie gave birth to Prince Luis Felipe, Duke of Braganza. In December of that year she had a daughter, Infanta Maria Anna, but she did not survive. In 1889 she gave birth to her last child, who would also be the last King of Portugal, Prince Manuel.

That same year Amélie became Queen consort as her husband ascended the Portuguese throne as King Carlos I. On the whole, Queen Amélie was a great success and very popular with the public. At a time when the enemies of the monarchy were doing their best to drum up sentiment against the Royal Family, Queen Amélie was a charming, elegant figure to win over the hard pressed Portuguese people. The reign of King Carlos I saw extreme economic disasters for Portugal and this was the source of the only criticism of the Queen with some accusing her of spending lavishly while the people were impoverished, rather in the style of Marie Antoinette. However, as with the doomed Queen of France, the criticism was just as unjustified and would probably have been leveled at her no matter how little she actually spent.

Those who knew her all described her as a very friendly, subdued and caring woman with an open and friendly style who cared deeply for the unfortunate. Medical causes dominated much of her extensive charity work. She worked to spread awareness for the prevention of tuberculosis, sponsored sanatoriums and more available pharmacies. The Queen was also artistically minded and enjoyed literature, the opera and theatre and occupied her time writing in her diary and painting. However, she was also a competent woman and acted as regent of Portugal while the King was away on foreign trips. For all of her charity work and support for the Church she was given the Golden Rose in 1892 by His Holiness Pope Leo XIII.

Nonetheless, republican attacks were persistent and they used the economic crisis to direct discontent toward the Royal Family. Many revolutionary groups were active at the time, republican and Masonic and conspiracies were everywhere. In response, King Carlos dissolved Parliament in 1907 and granted his prime minister dictatorial power to address the crisis. Numerous republican plotters were arrested and sent into exile in the African colonies but the plots persisted and the major parties proved unable to come to an agreement to save the country.

The fateful moment came a year later in 1908 when the Royal Family was crossing the main plaza in Lisbon in their carriage when a number of republican traitors opened fire on them. King Carlos was killed instantly, Dom Luis was mortally wounded and Prince Manuel was hit in the arm but escaped death thanks to the great heroism shown by Queen Amélie who shielded her son while waving the flower she carried at their attackers. Royal guards shot two of the murderers and others were rounded up later and found to be Masonic members of the Republican Party. Prince Dom Luis died within minutes of the attack and the following day the remaining, wounded, prince was proclaimed King Manuel II. Within two years he was deposed, a republic was declared and Dowager Queen Amélie accompanied her son into exile. She spent most of the rest of her life living in France, declining an offer from the Salazar regime to return to Portugal during the dangerous days of World War II, though she did visit one last time in 1945. Queen Amélie, the last royal consort of Portugal, died at Le Chesnay in 1951 at the age of 86.
Posted by MadMonarchist at 4:17 AM