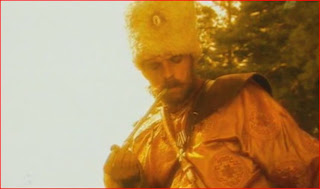 Recently "the One" Barack Obama decorated Joe Medicine Crow, a Native American historian and author, with the Presidential Medal of Freedom. Unfortunately it coincided with the mass murder at Fort Hood so my outrage on that occasion was side-tracked to the more immediate and serious issue. However, outraged -dare I say mad- I certainly was! To be clear, I am not upset that Joe Medicine Crow got the Medal of Freedom; he probably deserved it more than many others who have been given it for blatantly political reasons. What outraged me was simply the image presented: the most adamantly socialist president in U.S. history decorating an American Indian. Friends, Romans and countrymen, there is no better group to look to than the Native Americans to see how socialism "kills with kindness". To sum it up, there is no group in the United States that is given more benefits and social welfare than the Native Americans and it is no coincidence that there is also no group in this country more worse off than they are.

Of course, many years ago, the U.S. government openly fought the Indians, conquered them, killed them and displaced them. That would be shameful enough but the crimes of the old U.S. Cavalry pale in comparison to the crimes visited on the Native Americans by the bleeding heart liberal socialists who claim to be so concerned about them. They have showered them with social welfare to the point that a great many of them are now totally dependent on the U.S. government. The army killed them but the socialists have enslaved them to the very system that brought about their downfall. Today unemployment is commonly rampant on the Indian reservations (they live off their pensions from the government) as is alcoholism. Many waste their whole lives in such a fashion while others move away, intermarry with non-Indians and over time who they are is completely lost. It is a tragedy greater than any they have ever suffered from outright violence.

I see it this way. Place the blame wherever you like but the fact is there was a succession of Indian Wars in North America, the Army and the Indians fought and the Indians were defeated. However, at least then, despite all of their suffering, they fought well, they kept their dignity and they died in honorable battle for their traditional way of life. They lost their land but they kept their pride knowing that there is no shame in falling before a superior enemy. Then, however, the socialists came along and tried to sympathize with them and make everything better with government hand-outs. Already robbed of their nomadic way of life they soon were robbed of much of the rest of their culture as well through the "gift" of modern education. The tribes became democracies with the once proud role of chief being reduced to the level of a sleazy politician with a ceremonial headdress. Government payments robbed them of their independence and over time made them dependent on the government and so all of the other social problems mentioned have been the result. Nor are they the only such example.

In a recent post I touched on the history of the Mongols, another proud people of nomadic warriors who once very nearly conquered the world. That, of course, was before socialism and their takeover by a communist government. Since that time they have been robbed of their culture in much the same way, only more quickly and blatantly so. The communists destroyed their religion, destroyed their nomadic way of life turning the bulk of the population into urban dwellers. Socialism robbed them of their pride and independence to the point that most of the big businesses in Mongolia import Chinese workers because too many Mongols will quit after getting their first pay check to feed their alcoholism. What is all the more sad and outrageous is that in the case of both the American Indians and the Mongols they have been the victims of a totally foreign ideology imposed on them by outside forces.

I have the greatest respect for these cultures and it absolutely kills me to see the state they have been reduced to by "caring", "compassionate" liberals preaching "social justice". Others might not have the interest or concern for these people as I have, but everyone should pay attention because no one is inferior or superior to anyone else and if socialism and communism prevail everyone will end up in exactly the same condition; hopeless, struggling people totally dependent on big-government and the small ruling elite to see that we continue, not to live, but simply exist from the crumbs they distribute from the table they are feasting at. Obama can give an Indian elder a medal but he cannot and will not give them back their pride, their independence and their traditional way of life and that makes me a very, very ...... Mad Monarchist.

*Additional Note: This is not rocket science folks. Even Angelina Jolie (who, let's be honest, did not get where she is because of her brains) has recently criticized Obama for being all smoke & mirrors, more about welfare handouts than actually helping people better their lot in life. If she can figure it out - anyone can (not to worry libs, Brad's still an Obama man).
Posted by MadMonarchist at 12:23 AM