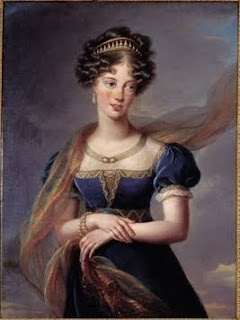 HRH Princess Caroline Ferdinande of Bourbon Two-Sicilies, Duchess de Berry certainly had a very colorful and eventful life. Even with all of the ups and downs I cannot help but marvel at the audacity of the woman. She was born Princess Maria Carolina Ferdinanda Luisa of Bourbon Two-Sicilies on November 5, 1798 to the Sicilian King Francis I and Queen Maria Clementina of Austria. In 1816 French and Sicilian diplomats arranged a marriage for her to Charles Ferdinand, Duc d'Berry, the nephew of the French King Louis XVIII. Their marriage was fruitful, producing three daughters, and it came as quite a blow to everyone when the Duc d'Berry was stabbed while he and the Princess were leaving an opera performance. The duke died of his wounds shortly thereafter but he had left his wife with child and seven months later Princess Caroline gave birth to the boy called the "miracle child" Henri Duc d'Bordeaux, better known by his later title the Comte de Chambord. As the direct male heir of King Louis XIV, little Henri was set to make Princess Caroline the future Queen Mother of France.

Everything was upset though with the overthrow of the much-maligned King Charles X (the man who famously said he would rather saw wood than be a constitutional monarch) in the July Revolution which unseated the senior Royal Family line. Princess Caroline was forced to go into exile in Great Britain. However, anyone who counted her out was sorely mistaken. She was determined to see the old royal line restored and her son crowned King of France. He had already been proclaimed and she always stressed to him and those around her that he was the legitimate French sovereign. Family connections helped her cross the continent back to Naples. Soon she was busy with a conspiracy to launch a royalist uprising in France to restore her son, the nominal King Henri V of France and Navarre.

Her primary confederate in this enterprise was the Vicomte de Saint-Priest. In 1832 the two of them led an attempted royalist rebellion in the famously loyal Vendee region and in Provence against the Orleanist "King of the French" Louis-Philippe. Unfortunately for them the would-be counterrevolution was a complete failure and both were arrested. Princess Caroline was arrested and thrown in prison but released the following year when she gave birth to the daughter of the Italian Duke della Grazia whom she had married in secret after returning to Naples. The two of them bought a villa and settled down to as normal a family life as possible, having three more children, until the nationalist unification of Italy forced them into hard times. The Princess and would-be Queen Mother of France finally died in Styria, Austria in 1870; the last person to attempt to restore the Bourbon monarchy by counterrevolution.
Posted by MadMonarchist at 1:09 AM