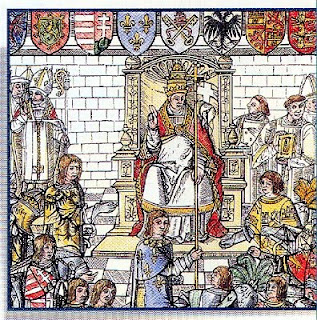 This last week saw the anniversary of the closing of the Council of Clermont, presided over by His Holiness Pope Urban II. The person and reputation of Pope Urban II will always be tied to the Crusades, which he initiated by calling for the first at the Council of Clermont in 1095. For this, many remember Urban II as the first defender of Christendom, who took it upon himself to unite the Christian nations to liberate the Holy Land from Muslim control. Others however, view him much more harshly, as the man who launched an aggressive invasion and opened a series of wars against the Islamic religion. An unbiased look at history will show the former as being much closer to the truth than the latter.

Pope Urban II was a man of exceptional a bility, who faced exceptional challenges from the very start of his reign. A Frenchman, from Chatillon-sur-Marne known only as Odo (or Otto), he was born around 1035 to an aristocratic family. Prior to his election he served as Prior of Cluny, cardinal and Bishop of Ostia. He was elected on March 12, 1088 when the Eternal City was still ruled by the anti-pope Clement III, who had been elected by German bishops under the control of Kaiser Heinrich IV. Urban II tried to make peace with the Emperor, having no argument with his secular authority, but Heinrich would not give an inch and the struggle continued until 1093 when Urban II was able to return to the See of Rome. Two years later, he called for the First Crusade against the Muslims.

The Crusades are often misunderstood and misrepresented as an aggressive Christian war of conquest against the otherwise peaceful Muslims. In fact, it would be more accurate to say that the Crusades were an act of self-defense on the part of the Christian community in order to liberate Jerusalem from the Muslims. Before this time, through no persuasion other than the sword, Islam had spread by leaps and bounds across the Middle East and North Africa, both of which were Christian areas before this time, since the last days of the Roman Empire. The Muslims had conquered Christian areas and the Christian power in most danger, the Eastern or Byzantine Empire, called on western Christendom to come to their aid.

Pope Urban II preached peace and common cause among the brotherhood of Christian nations in response to the Muslims that threatened to overrun them all. Already, attacks were being made against Constantinople, the Mediterranean was becoming the 'Saracen Sea" and Spain was in dire danger. It is a remarkable peace of evidence for the prestige of the Church and the Papacy, that when Urban II stood before the knights at Clermont and said "God wills it", all of Christendom responded. From Scandinavia across France and Germany Christians took up the cross to liberate the Holy Land. The two great accomplishments of the reign of Urban II was the reforms he brought to the Church and the liberation of Jerusalem, which came only two weeks before his death on July 29, 1099 after reigning 11 years.
Posted by MadMonarchist at 2:48 AM