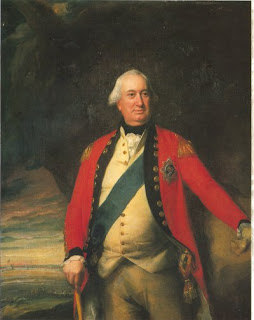 Charles Cornwallis, First Marquis of Cornwallis was born in 1738 in London. His family fought for King Charles I in the English Civil War and were ennobled by King Charles II in exile. They were well connected at court and with the Church of England. He went to Eton as a boy and in 1757 became an ensign in the Grenadier Guards. He was elected to the House of Commons from a village in Kent, where his family was from, and when his father died he entered the House of Lords in 1762 as the Second Earl of Cornwallis. During the French and Indian War he saw extensive service in Germany, distinguishing himself and advancing in rank.

After the war he returned to London, became Colonel of the Thirty-third Regiment of Foot and associated with the Whig political faction. As such, he had great sympathy for the grievances of the American colonists and voted against the Stamp Act, showing considerable solidarity with the colonials during the build-up to the War for Independence. However, when that war came, Cornwallis could not agree with outright rebellion and obeyed the summons of King George III to take part in the effort to restore Crown authority in North America. He arrived in America as a major general and deputy to General Sir Henry Clinton. He saw action in the disastrous attack on Charleston, South Carolina but then served with great ability at the British victories across Long Island, New York. With his own command he captured Fort Lee and pushed George Washington and his forces into New Jersey.

Cornwallis commanded the pursuit of Washington after his attacks on the Hessian garrison at Trenton and the raids of the two armies during the winter months. During the British campaign to take Philadelphia Cornwallis was instrumental in the victories at Brandywine, Germantown and then in the battle of Monmouth. After a visit home he came back to take command of the campaign in the southern colonies. Already by this time Lord Cornwallis had earned a great reputation as one of the most aggressive and capable British commanders, with one observer even comparing him to the Carthaginian general Hannibal. Along with his commander Clinton he presided over one of the greatest British victories of the war at the capture of Charleston.

Cornwallis made extensive use of loyalist units such as the British Legion and the Queen’s Rangers. He also recruited many slaves who were overwhelmingly sympathetic to the Crown for the promise of freedom in return for their service. Cornwallis routed a larger Continental army under Horatio Gates at the battle of Camden and then won another hard fought and bloody victory at Guilford Court House. Still, his forces were increasingly outnumbered and suffered from numerous attacks on their line of supply by rebel guerillas. Nonetheless, he continued to advance and marched into Virginia where, after devastating rebel forces in the region, he established a base on the coast from which he could be reinforced and re-supplied by sea.

Unfortunately, the French navy was able to block the British and a combined Franco-American army arrived to besiege Cornwallis at Yorktown. The Crown forces put up a brave fight but vastly outnumbered and surrounded Cornwallis would not sacrifice his men needlessly and so on October 19, 1781 surrendered his army. The war went on for two more years but the loss at Yorktown had broken the British will to continue the fight and the war ended in King George recognizing the independence of the United States of America.

In 1786 Cornwallis was made a knight of the Garter and Governor-General of India. He enacted reforms, re-organized the military forces there and won a victory in the Third Anglo-Mysore War which secured British domination of southern India. In 1792 he was made First Marquis of Cornwallis and the next year was made Lord Lieutenant of Ireland after the start of the 1798 uprising. He oversaw the suppression of the Irish rebels and the execution of many nationalists but also angered the Protestant elites of the country by arguing in favor of Catholic emancipation. Afterwards he was returned to his post as Governor-General of India but died shortly after his arrival in 1805. Although buried in India there is a statue of him in St Paul’s Cathedral.
Posted by MadMonarchist at 4:32 AM