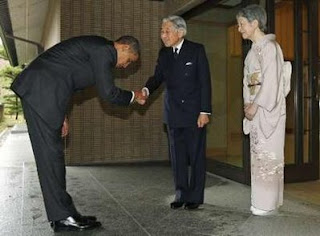 Alright, they really have already started but I thought I would make clear my thoughts on President Obama bowing to the Emperor of Japan. As some might remember when I addressed the controversy regarding Obama bowing to the King of Saudi Arabia I have no problem with this sort of thing and really fail to understand why anyone else would. My position remains unchanged. Obama is a common man, HIM Akihito in an Emperor and as such I see no reason why he shouldn't bow to him. Regardless of which, bowing to someone is a common form of greeting in Japan (one reason they've been less troubled with plague than the western world) and he is on the Emperor's turf here after all. I am certainly not a member of the Obama fan club but I think there are plenty of bigger issues and reasons to condemn him than for bowing to the Emperor of Japan. As far as I'm concerned it was the correct, polite and respectful thing to do and probably set a good example for the local Obama-fanatics that he shows all due respect to His Majesty the Emperor. He's done other things on this same visit that I have a problem with but bowing to the Emperor certainly does not make the list. On this issue, let Obama be I say.
Posted by MadMonarchist at 6:46 PM