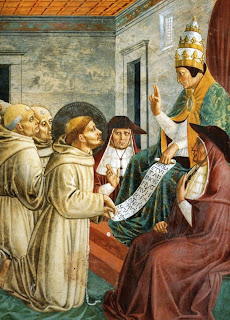 Whenever one considers the concept of "papal monarchy" the name that immediately comes to mind is Pope Innocent III, a man whose reign saw the combination of immense secular power as well as firm morals and religious devotion. An Italian of aristocratic background, Innocent was born Lotario de Conti, the son of a count whose family was to produce nine popes in all. He studied in Rome, then theology in Paris and law in Bologna. A servant of several popes he was elevated to the rank of Cardinal-Deacon in 1190 and wrote a very popular work on human suffering. In 1198, upon the death of Pope Celestine III, Conti was elected to the Throne of Peter and took the name Innocent III. From the very outset his primary goals were to reassert papal authority, restore Christian unity and bring about a revival of the faith. The recent fall of Jerusalem was, in his mind, divine punishment for the moral failures of Christendom.

Innocent III sent papal troops to clean out the banditry that was rampant in Rome and to recover the states of the Church. Sicily was a primary concern as he had been named guardian to the young future Emperor Frederick II who he crowned King of Sicily and for whom he was regent. In Church matters he called the 4th Lateran Council which ruled on the regulations for the reception of communion, called for a more strict life for the clergy and which outlawed harsh corporal punishments given to atone for sin. He also stressed the superiority of the spiritual life over the physical life, something which complemented his teaching that secular powers must be ultimately subordinate to spiritual powers -the Church was not to be ruled by any government. To many, his reign seemed like the era of the caesars, with all of Europe ruled from Rome, had returned.

In a sense, this was true as the reign of Innocent III saw the zenith of Catholic history with almost all of Europe united in one faith and with a great many countries declaring Innocent himself their feudal overlord. He put forward Frederick as Holy Roman Emperor, ruled on royal disputes in France, clashed with King John of England, eventually forcing him to concede on the issue of the rights of the Church and ruled on issues in countries as far flung as Spain, Sweden and Bulgaria. There was no doubt that Pope Innocent III was the single most powerful man in all of Europe. However, nominal submission did not always mean total obedience and two events were to scar his reign. The first was the calling of the Fourth Crusade. This was intended to march on the Holy Land via Egypt but the crusaders got sidetracked and ended up taking sides in one of the endless political disputes in the Byzantine Empire. The result was the infamous sacking of Constantinople for which Innocent III excommunicated the lot of his wayward warriors.

The other was the Albigensian crusade, a horrific civil war in France that grew out of political opportunism and a new heretical movement certain powers were eager to take advantage of. The fighting became gruesome and often merciless. It is disputed whether or not Innocent III's legate actually said, "kill them all, God will know his own" but it was to be a scar on the image of his reign thereafter. However, in Rome the Pope showed his benevolence by building hospitals, universities and cleaning up the city; restoring something of the old greatness of the region. Pope Innocent III died suddenly in Perugia in 1216, leaving behind a reputation as both a moral man and a strong leader. Never before or since did the Roman Pontiff hold such sway over the crowned heads of Europe.
Posted by MadMonarchist at 12:22 AM