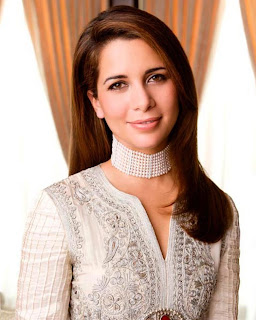 With all of the problems the Emirate of Dubai is going through, it is appropriate to take a look at one of the best things about the small gulf state; their royal consort Princess Haya Bint al-Hussein. Princess Haya was born in Amman, Jordan on May 3, 1974 to TM King Hussein I and Queen Alia of Jordan. Growing up she was educating in the United Kingdom, attending an all-girls boarding school in Bristol before going on to Oxford where she studied philosophy, politics and economics and graduated with honors. For many years she has been devoted to equestrian sports and in 2000 represented the Kingdom of Jordan at the Olympic Games in Sidney, Australia. She had the honor of carrying the Jordanian flag and participated in the show jumping competition.

Sharing her love of horses is her husband, whom she married on April 10, 2004, His Highness Sheikh Mohammed bin Rashid Al-Maktoum of Dubai and currently the Prime Minister of the United Arab Emirates. Princess Haya is the junior of the Sheikh's two wives and is the mother of one of his 19 children; Sheikha Al Jalila who was born on December 2, 2007 in Dubai. The birth was the occasion of much celebration, coinciding with U.A.E. National Day's 36th anniversary. Princess Haya, through her beauty, style and many social and charitable activities has become something of a global celebrity and is, perhaps, the most widely known and recognized royal from the United Arab Emirates.

Princess Haya, in 2006, was elected President of the International Equestrian Foundation and she also serves on the International Olympic Committee. She is the owner of several award winning race horses (Sheikh Mohammed is also a famous breeder and owner of race horses). The Princess also works with a number of humanitarian causes and organizations such as Tikyet Um Ali which serves the hungry of Jordan, the International Humanitarian City of Dubai, and numerous others. She has also done extensive work with the United Nations. She was an ambassador for the World Food Program, in 2007 was appointed a UN Peace ambassador and is a founding member of the Geneva-based Global Humanitarian Forum.

Princess Haya is a model modern Middle East royal woman, working to serve those in most need of help, encouraging modernization while maintaining traditional culture, not forgetting her roots as a member of the illustrious Hashemite dynasty and, quite touching to me, she has also done a great deal to honor and keep alive the memory of her late mother Queen Alia. Hopefully, with Princess Haya's support Sheikh Mohammed and his government will be able to bring Dubai out of their current financial crisis and ensure that the recent era of peace and prosperity continue and that Dubai and the U.A.E. will continue to be an example in the Middle East of peaceful, prosperous, advanced monarchies.
Posted by MadMonarchist at 12:34 AM