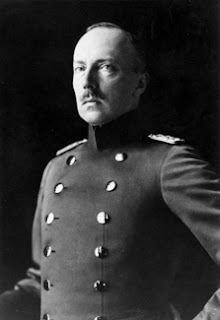 It was on this day in 1918 that HRH Prince Frederick Charles of Hessen-Kassel renounced his short-lived title of "King of Finland". Frederick Charles was the son of the Landgrave of Hesse and Princess Anna of Prussia. His ties with royal Europe were extensive, being a cousin of Czar Nicholas II of Russia and the brother-in-law of the German Kaiser after marrying his sister Princess Margaret of Prussia in 1893. He became head of the Hessian royal family in 1884 but was to be better known, perhaps, for his stint as the nominal King of Finland at the end of the First World War. During the conflict Germany enjoyed her greatest success on the eastern front, and there was also some encouragement from the fact that much of that part of the Russian Empire was populated by those known as the "Baltic Germans". As victory over Russia looked more and more certain plans were developed to create a number of new monarchies that would be incorporated into the German Empire, such as the Baltic duchies, under their own German royals. Finland, formerly a Grand Duchy of the Russian Empire, was declared an independent kingdom with German support when the Finns broke away from Russia following the revolution. On October 9, 1918 the Finnish Parliament elected Prince Frederick Charles "King of Finland". A model for royal government was drawn up, a Finnish crown was made and Frederick Charles began to make himself familiar with what was to be his new country. Of course, the survival of all of these new monarchies depended, naturally, on German victory in the World War and when it became clear, not long after, that such a thing was impossible the dream of a German-dominated eastern Europe began to fall apart. The nominal Kingdom of Finland held on for slightly longer than the German Empire itself but on December 14, 1918 Frederick Charles abdicated his throne and Finland subsequently adopted a republican constitution.

It was also on this day that the Union of Soviet Socialist Republics (boo! hiss!) was ejected from the League of Nations because of their invasion of Finland. Also, as we all know, Germany did not lose her interest in the Baltic or, to a lesser extent, Finland. A number of Baltic Germans rose to prominence in the Nazi German state and when the USSR invaded the Finns found the Germans the only ally left to them in their effort to regain what had been stolen from them by the Reds.

Posted by MadMonarchist at 1:38 AM