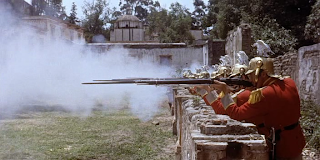 “Veracruz” was released in 1954 and starred Gary Cooper, Burt Lancaster, Denise Darcel and Cesar Romero. Unlike many other films regarding the period of the second Mexican Empire, “Veracruz” is considered by many to be one of the greatest classic westerns of all time. It was also, as far as I know, the first such film to be shot on location in Mexico and the filmmakers make great use of the natural beauty of the landscape, even though it at times clashes with reality in the story (given the setting of the film we really should not have seen any pyramids) and also unlike many of its fellows it was shot on a truly grand and epic scale with a huge cast, big battle scenes and some great shots of the scenic castle of Chapultepec. It is also one of the films about the war in Mexico to actually feature Emperor Maximilian (played by George Macready) though it is, unfortunately, a small though important part and a grossly inaccurate portrayal of the man.

The movie also includes a list of truly legendary actors of the western genre in supporting roles such as Jack Elam, Ernst Borgnine and Charles Bronson. It also marked a new, more violent and gritty era in western films. The story follows former Confederate soldier Ben Trane (Gary Cooper) who goes to Mexico to find work as a mercenary and hopefully earn enough money to save his devastated plantation back in Louisiana. Along the way he meets up with the gang of Joe Erin (Burt Lancaster) who is very much the anti-hero, an aggressive, arrogant outlaw dressed in black which Lancaster plays to perfection as someone with some depth to him and wickedly cool. Although Erin and Trane are opposites they each recognize the abilities of the other and realize that, for the time being at least, they need each other.

The group is met by the Marquis Henri de Labordere (Cesar Romero -TV’s Joker from the old Batman series) who the pair describe as a shifty fellow with a crocodile smile though such a description could be applied to Lancaster’s character as well. The whole party is almost captured by a Juarista general but are thwarted by Joe Erin in a display of extreme potential viciousness which thankfully does not go as far as threatened. As usual the Juaristas are portrayed as simple, righteous peasants fighting the good fight against the oppressive Emperor. Unlike many such movies, although the French are referenced and French names are heard, French troops are not really seen and the focus is instead on the imperialist forces of Maximilian. That would be a welcome change but after the Marquis takes the group to Chapultepec to meet the Emperor we see that Maximilian is played as a callous schemer, seemingly genteel and refined on the surface but totally ruthless underneath. Of course, as all readers of this blog should know, that is the complete opposite of historical reality. Maximilian had not a malicious bone in his body and rather than being untrustworthy was far too trusting of those around him who did not always deserve it.

Maximilian enlists Trane, Erin and crew to escort the Countess Duvarre (Denise Darcel) to Vera Cruz as she insists on returning to Paris. However, along the way it is discovered that the Countess and the Marquis are harboring a secret; a French payroll in gold. As expected the outlaws, Juaristas and Imperialistas end up fighting over the loot. Trane and Erin do not trust each other, with good reason, for Erin and the Countess are also plotting to abscond with the loot though it means the Countess must betray her beloved Marquis who is staunchly loyal to the Emperor; but then the Marquis is not quite the dupe others take him for either. It all ends in an epic battle at Vera Cruz for the gold, a feature which is so common in films about the Mexican Empire that the uninformed might think Maximilian was made of money rather than being perpetually cash-strapped. We also get the usual inaccuracies of hopeless saintly portrayals of the Juaristas, the imperialists portrayed as dastardly villains and once again the Imperial troops are given a Gatling gun (never ceases to baffle me).

Those, sadly but truly, are the rule rather than the exception with these movies but putting the unavoidable prejudices aside “Veracruz” is a great movie and one of my favorites. It would be worth viewing simply for the performances of Cooper and Lancaster and the great visuals, the epic scale and glittering style of it. I’m always up for a good cavalry charge and this movie delivers with racing Mexican lancers in shining breastplates and helmets, shoot-outs with Maximilian’s Palatine Guard and they throw in just a splash of humor and romance but never enough to detract from the primary story which is something few films today seem to be able to accomplish. So, to sum up, aside from the usual unavoidable aggravating inaccuracies the performances are great, the visuals are epic, the story is exciting and will keep your attention. All in all one of my favorites and certainly one of the all-time great westerns. 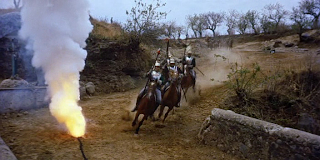 Posted by MadMonarchist at 12:28 AM