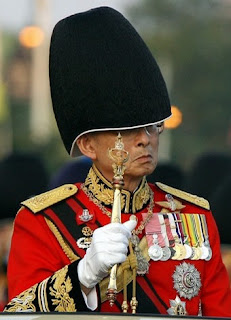 Today His Majesty King Bhumibol Aduladej the Great of Thailand, Rama IX, celebrates his 82nd birthday. The revered monarch was cheered by thousands of loyal subjects wearing pink for his still fragile health and waving flags for the occasion. The King appeared at the Grand Palace and gave an address to the nation, his first since taking ill over a month ago, and said that his primary source of happiness is the prosperity, peace and stability of his country. He also urged his people to help each other and devote themselves to good works. Afterwards the obviously tired monarch returned to the hospital for continued obseravtion. The Mad Monarchist extends to His Majesty a heartfelt happy birthday and best wishes for many more years of life to come.
Posted by MadMonarchist at 9:31 PM