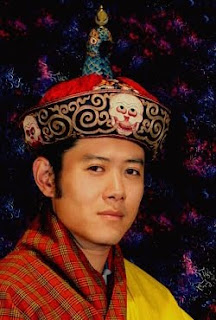 The world's youngest reigning monarch, His Majesty Jihme Khesar Wangchuk, King of Bhutan gave a speech on his recent state visit to India in which he spoke about globalization, how all countries and peoples depend on each other, how the wealthy must help the poor, how we are all inter-connected and basically all of the "we're one world" stuff everyone has heard before. Oh, how the mighty have fallen...... First, I should make clear that there was nothing inherently wrong with anything that the young King said, I just tend to recoil at the sound of it and it probably hits me all the harder because of the high pedestal I kept Bhutan on for so many years.

In the past, the little Himalayan Kingdom of Bhutan was my idea of a monarchial paradise. I've never been there, never been anywhere close to there, but it was my ideal little monarchist Shangri-La in the Himalayas. It was just comforting to know it was there; a country isolated from the outside world, untouched by modernity, where the people loved and were absolutely loyal to their absolute monarch, a very religious country where there was little to no government as we would understand it, no politics, no political parties or factions and no ideologies; just the people and their revered monarch. Now, of course, all of that has changed and it simply breaks my heart.

In recent years, starting with the current King's father, Bhutan embarked on a policy of modernization and openness (yuck!) which included allowing in TV's, the internet, cell phones and the formation of political parties to participate in the democratic process as the King surrendered his absolute authority in preference of a more "modern" constitutional monarchy. This was something handed down from on high, not something the people were clamoring for. The Bhutanese were peaceful, content and while they lived modestly by our standards they were very happy. They seemed perfectly comfortable having as little government as possible and allowing the king to handle national affairs while they concentrated on their own lives. They had to be dragged into democracy kicking and screaming. Now they've started preaching the whole 'we are the world' gospel. Again, nothing actually wrong with what the King said, but hearing it from the King of Bhutan especially makes me want to break down in sobs.

All of these changes were not desired or longed for by the people, they were not needed to save the monarchy from a crisis; Bhutan has long been a peaceful country, no threat to anyone and no bother, content to mind their own business and let the rest of the world stew in its own juices. Now, they seem determined to leave utopia behind them in favor of "progress". Call me a reactionary stick-in-the-mud and you will, but I hold to the old saying that when change is not necessary it is necessary NOT to change. Look at any country in the world you like, it is a fact confirmed by history, that no nation has done well once political parties have taken hold.

So, now Bhutan is anxious to be open to the rest of the world and follow their example. Now, instead of quiet family time they will have soap operas from India on TV. Instead of wearing their traditional clothes they will have American fashions that make everyone look like street bums. Instead of chanting and throat singing they now have ipods stocked with rap "music" rotting their brains out one Bhutanese teen at a time. Instead of a happy, united nation unconcerned with government and unfamiliar with politics they now have competing parties and soon will be able to enjoy the sort of political contests all too familiar in the west, bombarded by accusations from one party that the members of the other party are villains who want to poison the water, make you slaves and who probably eat little puppies for breakfast -vote candidate X!

So, congratulations on joining the rest of the world Bhutan. Soon, you too will be enjoying the full benefits of modernity. Soon they too will have, to quote the late TV series M*A*S*H, "freedom, achievement, hyperacidity, affluence, flatulence, technology, tension, the inalienable right to an early coronary sitting at your desk while plotting to stab your boss in the back." Seriously, I could just sit down and cry, my Shangri-La of Bhutan wants -progress- God forgive them.
Posted by MadMonarchist at 12:19 AM