The Queen of Mexico 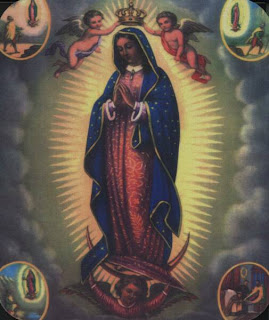 Today is the holiday of Our Lady of Guadalupe, a feast day in the Roman Catholic Church and a federal holiday in Mexico. It honors the image that appeared on the cloak of St Juan Diego and is credited with helping spread a massive wave of conversions to Christianity in Mexico. It is no exaggeration to say that the most significant icon in Mexico, and rapidly spreading abroad, is Our Lady of Guadalupe. Her image is to be seen everywhere Mexican people live and has been carried by royalists and revolutionaries alike. However, none have honored the Virgin of Guadalupe to the same extent as the two incarnations of the Mexican Empire. The first Emperor of Mexico, Don Agustin de Iturbide, while serving as regent, founded the Imperial Order of Guadalupe on November 9, 1821 as the supreme award for national service to the Empire of Mexico; the highest degree of which was reserved to members of the Imperial Family and the high clergy. It fell into disuse in 1823 until being revived as a republican order by President Antonio Lopez de Santa Anna. 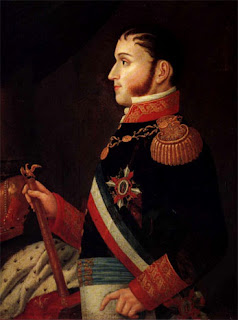 (Emperor Agustin wearing the original Guadalupe order)
On June 30, 1863 the honor was restored in a new style as the Imperial Order of Our Lady of Guadalupe by the provisional government and later reformed by Emperor Maximilian in 1865, taking second place in precedence to the Imperial Order of the Mexican Eagle. Emperor Maximilian and Empress Carlota made frequent visits to the actual icon of the Virgin of Guadalupe and the symbol was widely displayed and incorporated into imperial portraits. The Virgin of Guadalupe had been named patron of New Spain by Pope Benedict XIV in 1754. Pope Leo XIII crowned the image in 1895, Pope St Pius X named her patron of all Latin America in 1910 and in 1945 Pope Pius XII named Our Lady of Guadalupe “Queen of Mexico and Empress of the Americas”. In 1966 Pope Paul VI granted a Golden Rose to the shrine of the icon. 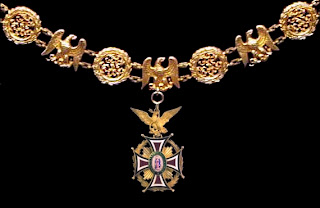 (the second version of the Order of Guadalupe)
In the last significant counterrevolutionary outbreak in Mexico, known as La Cristiada, the image of Our Lady of Guadalupe was emblazoned on the flags of the Catholic rebel forces and the Virgin was named generalissima of their army. In another sign of the religious monarchism of the movement their battlecry was "Viva Cristo Rey!" and their actual field commander was obsessed with the Mexican monarchist martyr General Miguel Miramon. Today, unfortunately, the Guadalupe image has become something of a pop icon, something associated with Mexico and Mexicans with no thought as to the meaning behind it; or, to focus on the revolutionary use of the image. However, these people need to be reminded that the icon is a monarchist icon, associated with monarchist movements both temporal and spiritual and a beloved icon of the Mexican emperors. (2nd empire image of the Virgin appearing to Maximilian & Carlota)
Posted by MadMonarchist at 12:42 AM

Email ThisBlogThis!Share to TwitterShare to FacebookShare to Pinterest
Labels: Mexico, Our Lady of Guadalupe