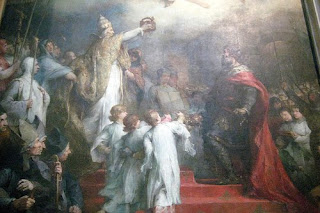 This being the day before Christmas, I am reminded of one of the most significant events in western history. It was on Christmas day in the year 800 that the Roman Empire in the west was reborn in the person of an illiterate but still educated and cosmopolitan Frankish king when His Holiness Pope Saint Leo III crowned that champion of western civilization, Charlemagne, Emperor of the Romans or as the title would later be best known, the first Holy Roman Emperor. This date should be burned into the minds of all monarchists certainly, all Christians certainly but all Europeans and all the descendants of western civilization as a whole.

The Holy Roman Empire has been often derided in recent times, everyone knows the phrase about it being neither holy, nor Roman nor an empire, but the fact of the matter is that the Holy Roman Empire was the central core of Christendom and a crucial part of the foundation of western civilization as a link between the glorious roots of ancient Rome and the flowering of Europe throughout the Middle Ages and into the Renaissance. Even those nations outside of the Holy Roman Empire which, after the time of Charlemagne, came to be centered largely on Germany (the first Reich or realm) all recognized the Emperor or Kaiser as the first among them even though he had no actual political jurisdiction over them.

Christendom was the tree that branched out around the Holy Roman Empire and gave the world great advances in learning, chivalry, religion and an example of the relationship that existed between religion and monarchy, the temporal and the spiritual, embodied by the Pope and the Holy Roman Emperor. These two also balanced each other out because all humans can be corrupted and sometimes the Pope had to deal with a wayward Emperor just as Emperors sometimes had to rescue the Church from disorder when a Pope was less than he should have been. It was also an example of a united Europe on an entirely different order than the sort of European unity we are familiar with today. The European unity such as existed as Christendom was a unity based on shared faith and a royal hierarchy but with power resting largely on the local level with each individual kingdom, principality, duchy or city-state.

In this regard the Holy Roman Empire itself represents something of an ideal for those like myself for whom empire is not an ugly word but which represents a multitude of small states rather than massive, centralized states. The Holy Roman Emperor was seen as the first defender of Christendom, one who was absolute in that no one would even think of not having an emperor but whose power was not arbitrary because every peasant, noble lord and royal had their own rights and responsibilities over what was their own. It was, in a sense, a constitutional monarchy though nothing like the symbolic monarchies we think of today. The rule of law was what was paramount and it was the duty of the monarch to uphold the law and that law, or constitution if you like, was based on Christianity.

Things did always go smoothly, which should only serve as an example that no system is incorruptible but success or failure depends on personal character and not some ideal political formula. However, the Holy Roman Empire, successor state of the Western Roman Empire, was the bulwark of Christendom for most of the last thousand years. It was not dissolved until 1806 when the last Holy Roman Emperor Francis II became Emperor Francis I of the Austrian Empire. This successor state of the successor state of ancient Rome lasted until 1918 with the defeat of Austria-Hungary in the First World War and the removal of Blessed Emperor Charles I. Thus for the largest part of Christian history the Holy Roman Empire was the heart and center of the wider Christendom and thus it is only fitting that it all started on Christmas 1,209 years ago this Christmas day.
Posted by MadMonarchist at 12:30 AM